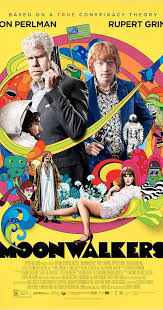 We love a good conspiracy theory and the more outlandish the better. Perhaps one of the most ludicrous is associated to one of the greatest ever film directors Stanley Kubrick who, so the conspiracy goes, was persuaded to help the CIA film a hoax landing of Apollo 11 not on the moon but on an isolated soundstage.

It’s a theory that has been around for many years and is given further credibility (or not) by theorists citing The Shining as being full of clues by Kubrick who they say was so racked with guilt about the fraud he helped perpetrate that he had to subtly tell the world through the medium of a major horror  film. Those examples include young Danny playing on the floor wearing a rocket on his jumper which when he stands up looks like the rocket taking off, the hotel room number had been changed from that in the book to 237 which happens to be the number of miles to the moon (237,000) and so on. We actually put it to one of the conspiracy theorists that this was utter rubbish to which he replied, ‘Oh I see you’re one of them are you? You’re in on it too?’

Anyway we digress and here’s a chance to win a film called MOONWALKERS, an hilarious, high-concept action comedy, arriving on DVD from May 30th, 2016 courtesy of Icon Film Distribution from the acclaimed producer Michael Gondry.

Directed by the advertsing world’s boy genius Antoine Bardou-Jacquet (holder of the Guinness World Record for “Most Awarded Commercial”), MOONWALKERS asks the question, ‘What if Apollo 11 never actually made it?’ What if, instead, the legendary Stanley Kubrick secretly shot the famous images of the moon landing in a studio, working for the US government?’

This is the premise of a perfectly (im)plausible conspiracy theory that takes us to swinging sixties London, where a stubborn CIA agent (Ron Perlman – Hellboy, Pacific Rim) is forced to team up with the lousy manager of a seedy rock band (Rupert Grint – Harry Potter, Underdogs) to develop the biggest con of all time, in this riotous, high-tempo action-comedy penned by the newcomer Dean Craig (Death At A Funeral, A Few Less Men) in one of the most leftfield comedies of the year.