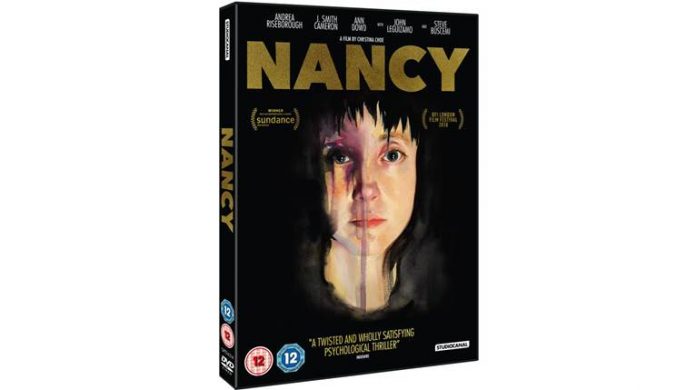 Nancy is not the film about the astrology obsessed former First Lady Nancy Reagan who was a vehement anti drugs campaigner and even invited the cast from BBC kids drama Grange Hill over to campaign with her not realizing that many of them were snorting up in the Whitehouse toilets.  Nancy is a film with a career-defining performance from Andrea Riseborough (Battle of the Sexes) as the titular anti-hero.

Directed by debutant Christina Choe – Winner of the Waldo Salt Screenwriting Award at Sundance Film Festival 2018, NANCY traces the way truth and fantasy bleed into one other in the mind of a woman on the fringes of society, who is increasingly convinced she was kidnapped as a child. Craving connection with others, Nancy (Andrea Riseborough – Mindhorn) creates elaborate pseudonyms on the internet. When she meets couple Leo (Steve Buscemi) and Ellen whose daughter went missing thirty years ago, fact and fiction begin to blur in Nancy’s mind.As their bond deepens she becomes increasingly convinced these strangers are her real parents and reasonable doubts give way to wilful belief until the power of emotion threatens to overcome all rationality.

This is a great little film which didn’t get the love it deserved on release but you can win a copy here just by answering the following question:

What 2017 Isle of Wight based film did Andrea Riseborough star in with Julian Barratt as an ex-TV star called in to help police hunt a serial killer?

Here’s the trailer for Nancy…….