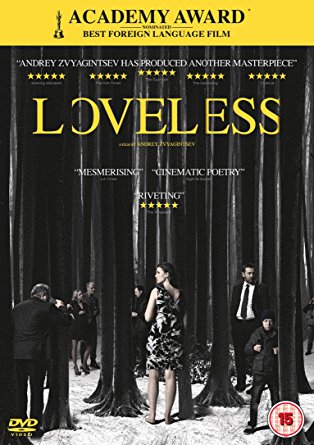 The break up of any marriage is unpleasant especially if children are involved and made worse when the mother (and unfortunately its usually the mother as one of our writer’s is finding out) prevents the child from seeing their father and sets about poisoning the child’s mind against the father. It’s all pretty reprehensible but the Loveless dvd takes a different stance.

The LOVELESS dvd is the latest masterpiece from the Oscar-nominated Russian auteur Andrey Zvyagintsev. It’s a bold and unflinching look at family dynamics in an era of growing alienation amidst the ever-increasing connectivity afforded by modern technology, LOVELESS is the work of a filmmaker at the height of his powers.

Zhenya (Maryana Spivak) and Boris (Alexey Rozin) are going through a vicious divorce marked by resentment, frustration and recriminations. Already embarking on new lives, each with a new partner, they are impatient to start again, to turn the page – even if it means threatening to abandon their 12-year-old son Alyosha. Until, after witnessing one of their fights, Alyosha disappears…

This is at times hard viewing with one of the most distressing scenes we’ve ever seen as their son stifles his crying as he secretly overhears them arguing that he is not wanted by either of them.

To win a copy of the Loveless dvd just answer the following question:

Which 1979 Hollywood film starring Dustin Hoffman & Meryl Streep features a divorcing couple in a custody battle for their son?