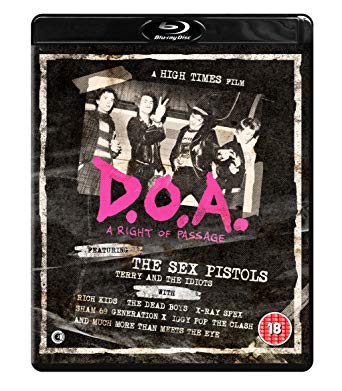 It seems to be a right of passage that every teenager rebels though today’s idea of rebellion seems to be retweeting some vacuous comment from some ill informed, half witted rapper that couldn’t be trusted to use a biro without getting it on his cuffs.

1977 saw the punk movement destroy and revitalise a bland music scene. By 1978 punk was dead as the Sex Pistols first US tour descended into chaos and the punk pioneers imploded.

Filmmaker Lech Kowalski was on both sides of the Atlantic to capture these seismic events in music history – the death of the Sex Pistols on their American tour, where they played their notorious gigs deep in the heart of Texas, culminating in their final show in San Francisco and the new wave of punk bands making an impact across the pond. This seminal moment in time is captured in the rarely seen D.O.A. A Right of Passage, which finally arrives for the first time on Blu-ray and DVD Dual format thanks to Second Sight. D.O.A.: A Right of Passage is the unique, grainy and up-close document of an iconic musical movement, packed with live footage of the Pistols’ incendiary American shows, as well as live performances from the greatest punk band you’ve never heard of, Terry and The Idiots, alongside Dead Boys, Generation X, Rich Kids, X-Ray Spex, Sham 69 with additional music from The Clash and Iggy Pop.

A Right of Passage takes us behind-the-scenes via bars, clubs and car parks and features the now infamous Sid Vicious and Nancy Spungen bed interview. And no punk documentary would be complete without an appearance from the inimitable Mary Whitehouse.

You can win a copy of A Right of Passage just by answering the following question:

Who was the manager of the Sex Pistols?

Here’ s the DOA A Right of Passage trailer…….