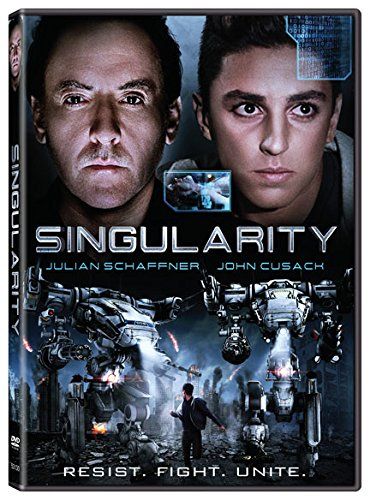 Everyone is an individual just ask all those thousands of young men who wear their jeans in identical fashion slung low below their Primark clad backsides. ‘Singularity’ on the other hand is a sci-fi film starring John Cusack who never seems to get the break out, award winning role that he’s missed out on his entire career.

In 2020, Elias van Dorne (John Cusack), CEO of the world’s largest robotics company, introduces his most powerful invention: Kronos, a super-computer designed to end all wars. However, it quickly determines that mankind itself is the biggest threat to world peace and launches an attack to rid the earth of the “infection” of man. Years later, a small team of survivors set out in search of a new world where mankind exists without fear of robot persecution. But does this world actually exist? And will they live long enough to find out?

Singularity is  a decent action film and you can win a copy of it here just by answering the following question:

What film features Arnold Schwarzeneggar as a killer robot from the future out to kill the mother of a future resistance leader?

a) Conan the Barbarian