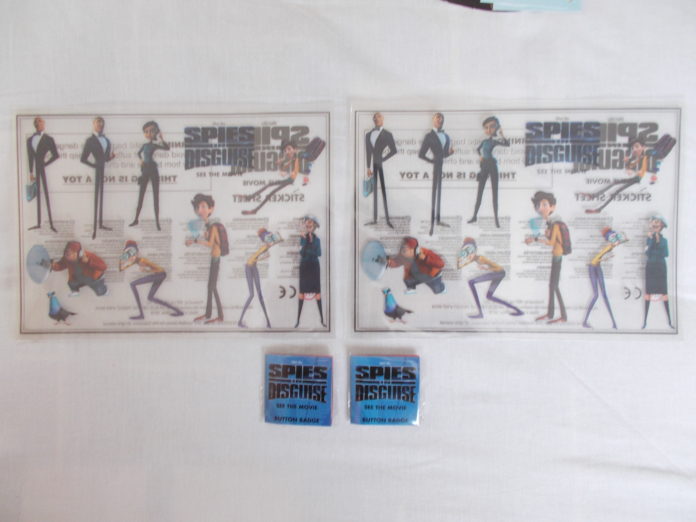 With the release of the hilarious action packed Will Smith / Tom Holland animated film, ‘Spies in Disguise’ we are offering you a chance to win a prize pack in our Spies in Disguise competition that includes a set of sticker sheets and button badges as per the photo.

Coming from the studio that gave us the Ice Age films, Rio and Robots and here when the world’s best spy (voiced by Will Smith)  is turned into a pigeon, he must rely on his nerdy tech officer (voiced by Tom Holland) to save the world. The film has a great cast providing the voices of various characters that includes Karen Gillan (Jumanji The Next Chapter), Ben Mendelsohn, and….um….DJ Khaled who, to us, looks like a kebab shop owner, Directed by Nick Bruno veteran of Blue Sky studios and has been involved with the Ice Age films and co-directed by Troy Quane who has been involved with The Peanuts Movie and Hotel Transylvania all of which have been a great success. The film opens in the UK on Boxing Day and you can win our Spies in Disguise competition by just following the below instructions.

To be in with a chance of winning our Spies in Disguise competition:

Here’s the Spies in Disguise trailer……