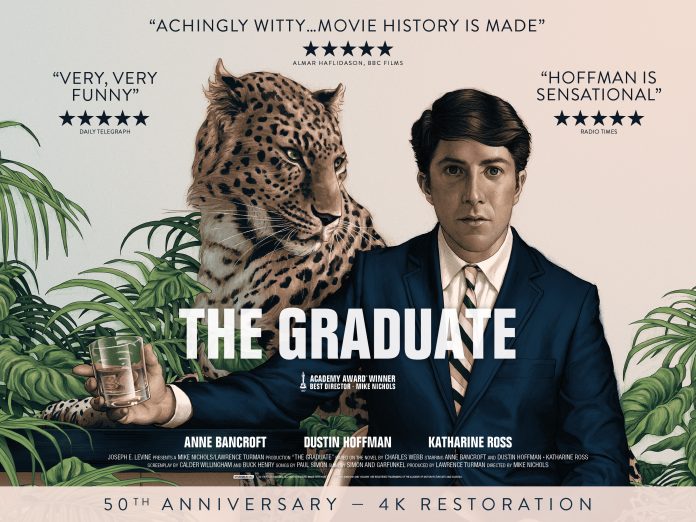 We can hardly believe that ‘The Graduate’ the film that made Dustin Hoffman a star is 50 years old.  A really great film that’s eminently quotable  (‘Are you trying to seduce me Mrs Robinson?’) it rightly won its director Mike Nichols, a Best Director Oscar as well as earning  nominations for its three main actors Dustin Hoffman, Anne Bancroft & Katherine Ross.

A complete sensation on its original release in 1967, THE GRADUATE was a one-of-a-kind cinematic portrait of America which captured the mood of disaffected youth seething beneath the laid-back exterior of 1960s California. It also introduced the music of Simon & Garfunkel to a wider audience and featured one of the most famous seductions in movie history and a truly iconic final scene. THE GRADUATE.

So to celebrate the anniversary of the film STUDIOCANAL are very proud to release a pristine new 4K restoration.

Benjamin Braddock (Dustin Hoffman) has just finished college and is already lost in a sea of confusion as he wonders what to do with his life. He returns to his parents’ luxurious Beverly Hills home, where he idles away the summer floating in the pool and brooding in silence.  He is rescued from the boredom when he is seduced into a clandestine affair with a middle-aged married friend of his parents, Mrs Robinson (Anne Bancroft). That liaison is soon complicated by Benjamin’s infatuation with her college-age daughter Elaine (Katharine Ross).

Visually imaginative and impeccably acted, with a witty, endlessly quotable script by Calder Willingham and Buck Henry (based on the novel by Charles Webb), with a supporting cast that includes William Daniels, Murray Hamilton, Walter Brooke and Elizabeth Wilson,  THE GRADUATE had the kind of cultural impact that comes along only once in a generation.

This 50th Anniversary 4K restoration was created from the 35mm original camera negative by the Criterion Collection. The colour timing was done by referencing a previous colour grading that had been supervised by Grover Crisp at Sony Pictures and approved by director Mike Nichols. The 5.1 surround-sound remix, approved by the director, was created from the 35mm magnetic tracks and the original soundtrack recordings at Chace Audio.

Special features on the DVD and Blu-ray Special Editions:

This really is a stunning disc with a superb plethora of extras and we’re giving you the chance to win a copy of the film by just answering the following question.

Which two films has won an Oscar as Best Actor?

b) Kramer vs Kramer & Rain Man