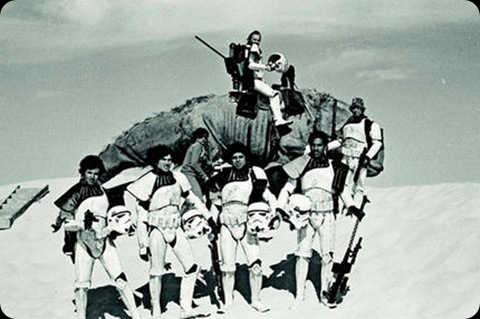 With the next Star Wars film, ‘Rogue One’ only a few weeks away what better time to have a look back all the way to 1977 and the release of the original film and here’s your chance to win the great documentary ‘A Love Letter to Star Wars’.

It’s a heartfelt documentary that puts centre stage a group of people who were intimately involved with a pop culture phenomenon. In 1976, the original STAR WARS movie was shot in suburban North London. Nobody involved had any idea how big the film would become, many couldn’t even remember the title. Yet, for the extras and actors in smaller role, their faces hidden behind masks and beneath helmets, this seemingly insignificant job would go on to colour their lives even four decades later. Filmmaker Jon Spira has tracked down a cross-section of these actors and extras, including David Prowse (Darth Vader) and Jeremy Bulloch (Boba Fett), to find out what it means to have been a part of the most beloved cinematic universe of all time.

This is an absolute  must if you’re a Star Wars fan and to win a copy just answer the following question:

Zeros and Ones – REVIEW