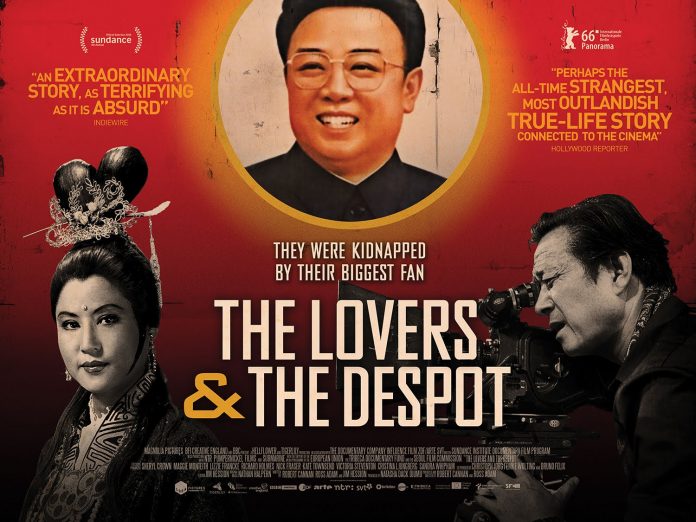 The Seth Rogan comedy ‘The Interview’ about an assassination attempt of the North Korean leader caused all manner of problems especially for Sony who produced the film and had their security hacked by the country’s top tech people who then released a load of sensitive information including the script for ‘SPECTRE’ and an embarrassing load of memos from Sony’s boss about Angelina Jolie. However ‘The Interview’ was a work of fiction but this week’s competition film, ‘The Lovers and the Despot’ makes ‘The Interview’ look plausible.

The Lovers and the Despot is a sensational documentary thriller that tells the story of young and ambitious South Korean film director Shin Sang-ok and talented actress Choi Eun-hee who meet and fall in love in the post war Korea of the 1950s. A string of awards for their films and a happy family life with two children follow. Reaching the top of Korean society, it seems like things can’t get any better for this golden couple. But then Choi discovers Shin has been having an affair with a younger actress- an affair that has produced two children.

The Shin Films company is also in financial trouble so in 1978 Choi, having divorced Shin, heads to Hong Kong to search out new business opportunities. However Choi is kidnapped by North Korean agents in Hong Kong and taken to meet the North Korean leader Kim Jong-il.  A few months later, whilst retracing Choi’s last steps, Shin also finds himself kidnapped and carted off to North Korea.

Following five years of imprisonment, they are eventually reunited by movie obsessed Kim Jong-il, who declares them his own filmmakers. Having rekindled their love for each other, they plan their escape from North Korea, but not before producing 17 feature films for Kim and gaining his trust in the process. And then, finally, embarking on a daring escape plan…

If this had been pitched to any studio executive it would have been laughed off the backlot but incredibly this is a true story and a really great documentary film and here’s your chance to win a copy by just answering the following question.

What famous Japanese monster from the depths of the ocean has had major blockbuster films made about it in 1998 by Roland Emmerich and in 2014 by Gareth Edwards?