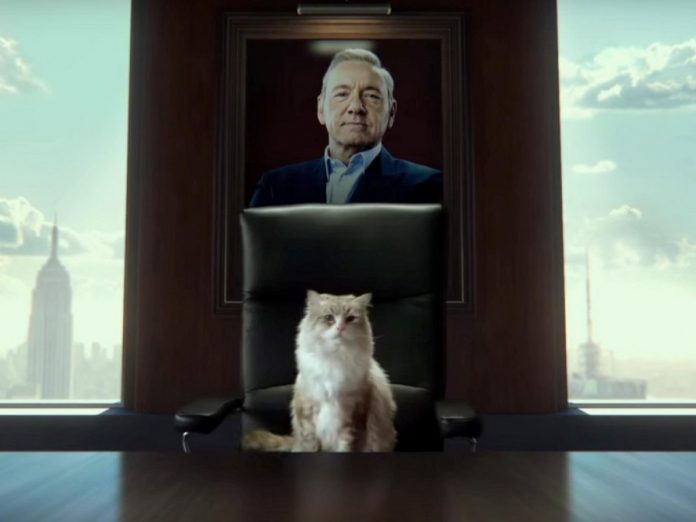 Here’s another competition for Christmas.

Join furry fiend Mr. Fuzzypants (a.k.a. Kevin Spacey) for this season’s most hilarious feline caper, NINE LIVES, which arrives on EST from 10th December and yours to own on Blu-ray & DVD from 12th December, 2016, courtesy of Lionsgate Home Entertainment.

Tom Brand (Kevin Spacey), billionaire businessman and soon-to-be owner of the tallest skyscraper in the northern hemisphere, is a workaholic whose lifestyle has disconnected him from his family, particularly his beautiful wife Lara (Jennifer Garner) and his adoring daughter Rebecca (Malina Weissman). When Tom forgets to buy Rebecca a present for her 11th birthday he rushes out in a panic and finds himself in a mystical pet store brimming with odd and exotic cats. Fortunately the store’s eccentric owner, Felix Perkins (Christopher Walken), has the perfect pet for him: Fluffy feline, Mr. Fuzzypants.

However Mr. Fuzzypants proves to be both a blessing and a curse…  En route to his daughter’s party, Tom has a terrible accident. When he regains consciousness he discovers that he has become trapped inside the body of the cat…! Despite being a self-professed cat hater, after a serious of hilarious scrapes Tom realises that occupying the body of a fluffy moggy can have its benefits – namely, spending more time with his family.

Boasting an all-star supporting cast including Christopher Walken, Jennifer Garner, Robbie Amell and newcomer Malina Weissman, Nine Lives is a funny, heart-warming tale about the importance of family – and pets! The purrrrfect Christmas gift to get your paws on this December.

Kevin Spacey has won two Oscars for which films?

b) American Beauty & The Usual Suspects