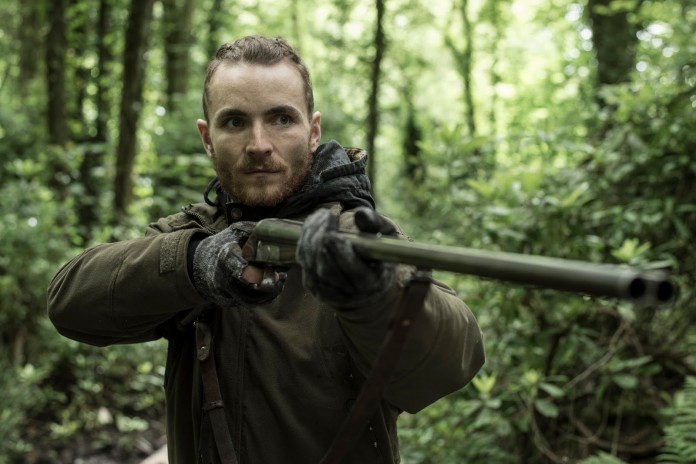 Our first thought when seeing the title of this week’s new film was that it was about one of our writers enduring the myriad and never ending stream of bad jokes the Editor comes up with on a daily basis whereas this is actually about a lone male living deep in the forest and living off a small allotment of vegetables he grows. It doesn’t sound the most enthralling of set ups but what follows is, at times, very uncomfortable viewing.

In a kill-or-be-killed world where starvation is rife and strangers are always dangerous, The Survivalist lives off the grid, and by his wits. When a starving woman and her teenage daughter discover his forest refuge, his loneliness drives him to strike a bargain with them in return for bed and board. But as desire becomes stronger than necessity, the exchange becomes an uneasy, ongoing arrangement which threatens not only his carefully constructed world but also his life.

A captivating thriller, THE SURVIVALIST marks the feature debut of writer-director Stephen Fingleton. Hailed by us at AnyGoodFilms? as ‘an outstanding debut’,  the film boasts stellar performances from Martin McCann (’71, Shadow Dancer, X+Y), Mia Goth (Nymphomaniac Part II, A Cure For Wellness, and just announced to star in Clare Denis’ English-language debut High Life opposite Robert Pattinson) and Olwen Fouéré (This Must be the Place).

Bulldog Film Distribution is pleased to announce the UK release of THE SURVIVALIST, available on Blu-ray, DVD and Digital HD from 18th April 2016.

To celebrate its release, we have 3 x DVDs to give away!

The director of ‘The Survivalist’ was nominated for a BAFTA Award for Outstanding Debut by a British Writer, Director, or Producer. What is his name?

THE SURVIVALIST is available on Blu-ray, DVD and Digital HD from 18th April 2016