Quite why a film would be called, ‘almost twenty past seven’ is anyone’s guess but that’s what our  Editor thought 1917 was (‘You’re fired!’ – Ed). What it is is possibly one of the best films we’ll see this year.  Directed and co-written by Sam Mendes 1917 is set during the latter stages of World War 1 where two soldiers Lance Corporal Blake (Dean Charles Chapman) and Lance Corporal Schofield (George Mackay) are selected to run a seemingly impossible mission but one that will have horrific consequences if they fail.  Both are tasked by a General with delivering a message deep in enemy territory to the colonel of 1600 men who are preparing for an assault on the Germans forces who have set up a trap that will see all 1600 killed. What makes the Lance Corporal’s mission more personal  is that one of their brothers is amongst the 1600 about to be slaughtered if they can’t get the General’s order through.

There’s a pressing urgency about their mission as time is not on their side and the stroke of genius here is that Mendes camera constantly stays with them for the entire time in one long seamless shot. In reality it’s a series of very long takes expertly sewn together by top Editor Lee Smith who seems to flit between doing films for Christopher Nolan (Batman trilogy, Dunkirk) and now Mendes  (Spectre). It’s expertly choreographed by Mendes and brilliantly photographed by Roger Deakins weaving in and out of trenches, across water , through dark tunnels and bright explosions and a variety of stunts. If nothing else 1917 is an astonishing technical achievement. But it is more than that as the two soldiers swop stories and anecdotes as they carefully make their way through no man’s land strewn with dead animals, rotting corpses and rats, snipers and plane crashes whilst briefly encountering others each with a story that brings a human element to the scale of what the film makers have achieved here. 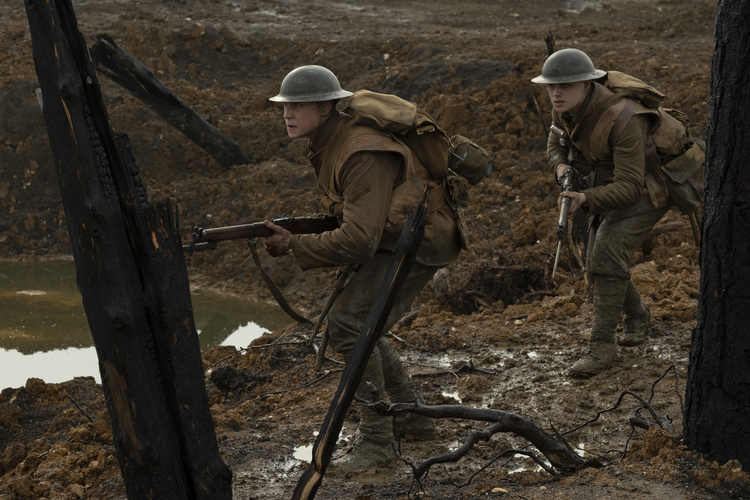 The two unknown leads are good and there is equally good cameo support from Mark Strong, Benedict Cumberbatch, Colin Firth and especially Andrew Scott as a world weary, cynical lieutenant.  Dunkirk & Saving Private Ryan are the obvious touchstones here but 1917 is very much its own thing and has been brilliantly put together with such panache for a film comprising apparently of just one shot that never really brings attention to the technique used. There’s little to dislike here and 1917 must surely be the film to beat when it comes to Best Film Oscar. 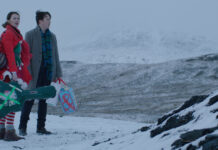 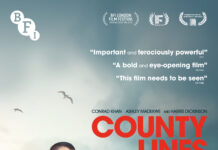