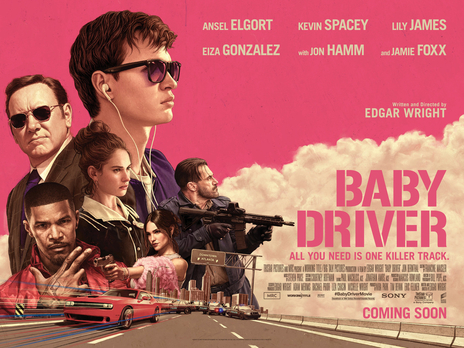 At the height of the joy riding craze we never understood why those convicted of indulging in such a crime would be banned from driving as if that would make any difference.

At the heart of Edgar Wright’s new film Baby Driver is a highly skilled joy rider with a tragic back story about his mother. Orphaned he’s been bought up by a mute black man but has fallen into the company of crime lord Kevin Spacey and is in debt to him which he repays by being a getaway driver for gangs he hires to carry out the robberies he plots. Nothing out of the ordinary here or should that be hear because Baby Driver suffers from tinnitus and constantly listens to music to drown out the white noise in his ears. It’s also an excuse for director Wright to include some of his favourite tunes to set against some stunning car chases none more so than the opening heist.

Things all get difficult when Spacey refuses to let him go once the debt is paid off and insists on him carrying on as his driver with the threat to the safety of his adopted father and new found girlfriend,  a waitress played by Lily James, for the eponymous one last job with a crew that includes loved up but lethal couple Jon Hamm & Eiza Gonzalez and joined by the unstable but intuitive Jamie Foxx. How is he ever going to get out of this?

Edgar Wright has a super stylish eye with a knowingly wink to the audience and all highly distinctive in the terms of visuals. It’s best exemplified with what seems to be a one take shot of Baby singing and dancing as he walks down the street to get coffee for the gang. It’s all done to a song where Baby has to hit his marks at specific points in the song as lyrics reflect what we see on screen whether it be graffiti on a wall or a fly poster on a lamp post its all choreographed to within an inch of its life. With his beloved cornetto trilogy made on a far smaller budget than these it’s interesting to see what he can do with far more money and the car chases are stunning but suffer from the law of diminishing returns because though the opening  is exhilarating to watch by the end they lose their sheen. Music plays constantly throughout and it’s a bit like a mix tape with a movie made to fit and though there is a mixture of great tracks which includes The Damned’s, Neat, Neat, Neat (Why does no one ever use the classic, A New Rose?) to more soulful tracks. It’s not always to everyone taste and towards the end there is a moment where there is complete silence where no music plays which is oddly blissful.

Spacey turns in his enjoyably confident  crime lord, Jamie Foxx turns in a variation of his M*****F***** Jones schtick from ‘Horrible Bosses’, Jon Hamm continues his quest for a really great stand out role for himself,  and Lily James is underwritten in a slightly dull love story. Ansel Elgort, a name that looks like a newspaper typo, plays Baby and is something of a man child and whether it’s him sitting there wearing shades listening  to his ipod or he’s jigging about miming to songs he comes across as a little smug even arrogant and its difficult to root for someone no matter how tragic their back story when they come across like that.

Wright’s visuals are here toned down considerably when compared to his first Hollywood film ‘Scott Pilgrim vs The World’ which was astonishing and this has its undoubted moments of brilliance but this is a little overlong and like any joy driver knows a car at this speed will eventually run out of petrol.