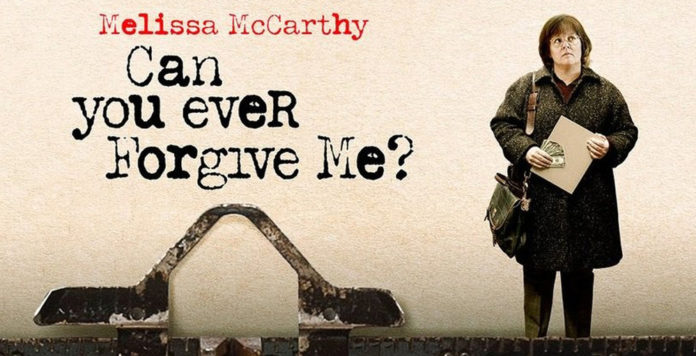 Having foisted a litany of appalling pop songs accompanied by laughable dance routines topped off with battering a female toilet attendant, Geordie chancer Cheryl Tweedy – Cole- Fernandez – Chav lacked the common courtesy or humility to ask the ever suffering public, Can you ever forgive me? which is the title of the autobiographical film about real life author Lee Israel. In fact the only thing Cole does share with author Lee Israel is a criminal record albeit Cole’s is for violence whereas Israel’s was for fraud.

As Israel Melissa McCarthy is ideally cast and we first see her slumped at her office desk openly drinking verbally abusing the rest of the staff in the office who challenge her and it ends with her being fired. It’s the final nail on the downward spiral her career has taken. As a published biographer of slightly obscure figures her books have ended up in the discount bin (another things she shares with Cheryl Cole) and already months behind with her rent her career, like her beloved cat, is on its last legs.

To raise cash Israel starts selling anything that she can lay her hands on which includes a signed letter from a famous author. It such an easy sell that it sparks an idea that her way with words means she can write in any style. So she hatches her plan buying up age appropriate typewriters and begins composing letters from a variety of famous writers that includes Noel Coward forging their signatures using an old TV as a light box.  It’s so simple that it almost seems unbelievable that so many ‘experts’ and ‘authenticators’ were taken in and passed off the forgeries as real in fact we ourselves only recently found how easy it was when we sold a genuine email from William Shakespeare. We’re shortly hoping to made a small fortune when we auction the first ever instagram made by Neanderthal man (or Cheryl Cole as she’s more commonly known).

Her bills are paid and her heavy drinking funded where she spends her ill gotten gains at a local bar where she befriends Jack Hock (Richard E Grant). It’s a friendship that blossoms with the lonely Israel, having split up from a girlfriend years previously, and whose only friend now is her ailing cat. Hock on the other hand is openly and flamboyantly gay and he spurs her on to ever greater frauds and she starts enjoying being alive again tormenting her elusive publisher with prank calls pretending to be Nora Ephron. However almost from the start as she gets whisked away with the ease of her con that it’s inevitable they are destined to be rumbled. 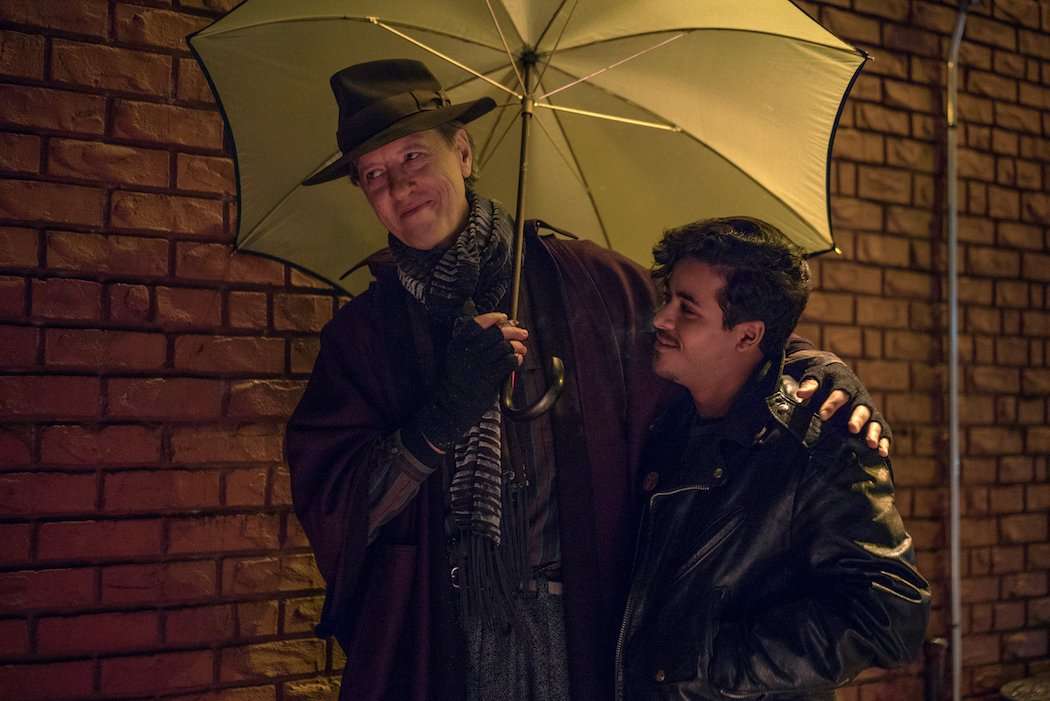 Based on Lee Israel’s own book of her scam McCarthy plays her brilliantly veering between spiky yet lonely, with a potential romance with an equally lonely female bookshop owner faltering due to Israel’s reluctance in being emotionally hurt again and is another in a long line of comic actors who are just as adept, and in McCarthy’s case perhaps even more so, as a straight actor. Grant too excels in what is essentially an older version of his Withnail character way back in 1987 yet this has garnered him his first ever Oscar nomination along with McCarthy too in what’s a first for her also in a dramatic role (after her nomination for the comedy ‘Bridesmaids’).

This is a compelling story made all the more fascinating that it went on for so long, fooled so many people with he forged letters even being authenticated as genuine and ending up in respected books and journals. Can you ever forgive me? is great fun and hugely watchable which is more than can ever be said of Cheryl Cole.

Here’s the trailer for Can you ever forgive me?