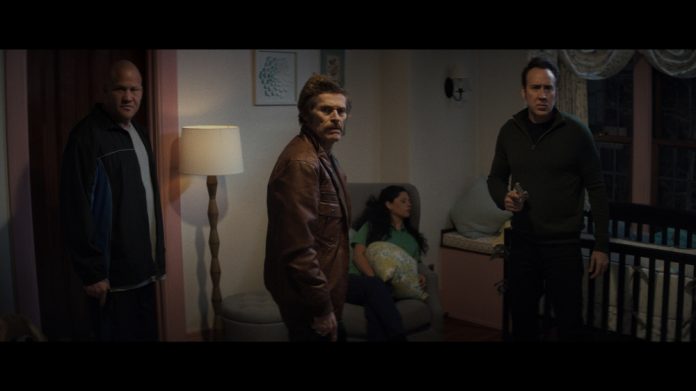 Paul Schrader is perhaps not exactly a household name but his work as a screenwriter with Martin Scorsese is far better known as together they’ve made Taxi Driver, Raging Bull, The Last Temptation of Christ & Bringing out the Dead. Generally he’s highly regarded but the past 10 years have not been kind to him. Having directed a fourth Exorcist film the studio hated it so much they reshot the whole film with a new director then things got worse with ‘The Canyons’ which turned into a disaster mostly due to its star Linsey Lohan and all the trouble that came with casting her. It couldn’t get any worse. It did.  2014’s ‘Dying of the Light’ starring Nicholas Cage was taken off him by the studio who recut the whole film and he disowned himself from it.

So his next film ‘Dog eat Dog’ might be the film that ends his run of bad luck. Once again he’s cast Nicolas Cage as an ex convict who falls back in with his old crew, a borderline lunatic rightly called Mad Dog (Willem Dafoe) and a slab of muscle called Diesel (Christopher Michael Crook). It’s Dafoe who sets the tone from the start as he watches a TV chat show about gun ownership. Iit’s all moderately amusing before the scene quickly becomes horrifying as he repeatedly stabs a fat chav female to death quickly followed by the brutal slaying of her daughter. It’s a scene typical of the jarring change in tone of the rest of the film and it’s a coke fuelled unpredictable Dafoe rather than Cage who is the most unbalanced of the three. The trio are hired by a mob boss, played by Paul Schrader himself in his first on screen role, to kidnap the baby of a rival mob boss.  Understandably its meant to be worrying that a trio of varying mental stability should be involved in the kidnap of a vulnerable baby and when it comes it veers again into a shocking change in tone.

Having come from a generation that included Scorsese, Spielberg and DePalma he seems to have turned to the modern generation of writer/directors, most obviously Tarantino, for inspiration. In fact the film itself is based on a novel by the late Eddie Bunker who had a small role as Mr Blue in Tarantino’s ‘Reservoir Dogs’. The oddly eclectic sound track which includes another Tarantino reference with a  cover of the 5,6,7,8’s Woo-Hoo from Kill Bill is all part of the wilfully playful style Schrader has adopted with its change from colour to monotone and it’s comedy punctuated by some shocking violence which is frequently  unsettlingly and unpleasant. If nothing else at least Cage, who normally turns the performance up to 11, has turned it down here leaving it to Dafoe for the hysterics. At least for Schrader this is a move in the right direction after the past ten years which is no bad thing.