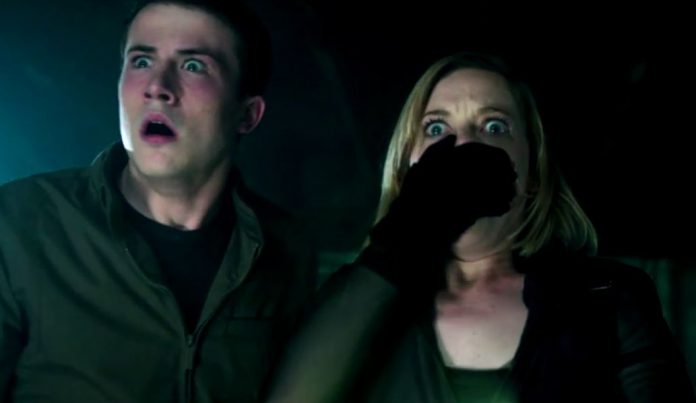 Kim Kardashian, Piers Morgan, Kim Kardashian, Heather Mills, Kim Kardashian, Amanda Holden and of course Kim Kardashian. All alleged celebrities who we’d like to see in a film called, ‘Don’t Breathe’. Instead what we actually have is a decent thriller from writer /director Fede Alvarez who gave us a worthy remake of Evil Dead a few years ago. Starting off with Rocky (Jane Levy), Alex (Dylan Minnette) and Money (Daniel Zovatto) easily breaking into a house, because Alex gets the alarms codes from his Dad’s security business, they fleece the house before wrecking it – making themselves immediately dislikeable to any audience member  who’s been burgled.  It’s when they find out about a blind man (Stephen Lang) living alone in a house in a rough part of town that the story really kicks in when they hear that he has a lump sum of money hidden in his house awarded to him by a court from the rich parents of the woman who killed his daughter in a motor accident to prevent her serving a jail sentence. As far as the three are concerned it’s going to be the fabled ‘one last job’ and as their victim is blind it should be easy pickings. Inevitably they find it’s anything but easy with Lang ferociously independent and despite his disability he’s able bodied and fiercely protective of his dilapidated house and the film quickly becomes one of cat and mouse with each party alternatively getting the upper hand.

And for a film about burglars the film plays with your sympathies up to a point because you can’t help but feel that they’re getting exactly what they deserve when Lang turns the tables on them only for Alvarez and his co writer Rodo Sayagues to turn the audience against him and your sympathies now siding with the burglars as they get so close to escaping finding that the bars on the house that were to keep them out now act like a cage to keep them in. It’s Lang as the avenging angel out to punish them who is the stand out in a cast with very little dialogue in what is absolutely a directors film with excellent set pieces. With a notable sequence Lang, being blind, levels the playing field by turning off all the lights in the house and for once a film with a scene shot in the dark it is actually really dark for once because most other films with scenes set in the darkness there’s always a light source somewhere that makes the scene lose any credibility as characters can clearly see. Here Alvarez and his cinematographer use special night vision camera lenses and the actors do stumble around wide eyed, arms outstretched in the darkness. Alvarez has used everything at his disposal – stripping the film of most of its dialogue, unafraid to use silence and like director David Fincher in ‘Panic Room’, though perhaps not as effectively, uses a single tracking shot to roam around the layout of the house.

Though it’s an updating of the 1967 Audrey Hepburn / Alan Alda classic ‘Wait Until Dark’ at almost 90 minutes this is the perfect length for what is a thrilling rollercoaster of one upmanship  with a grey moral heart albeit with some grim and particularly unsavoury moments.