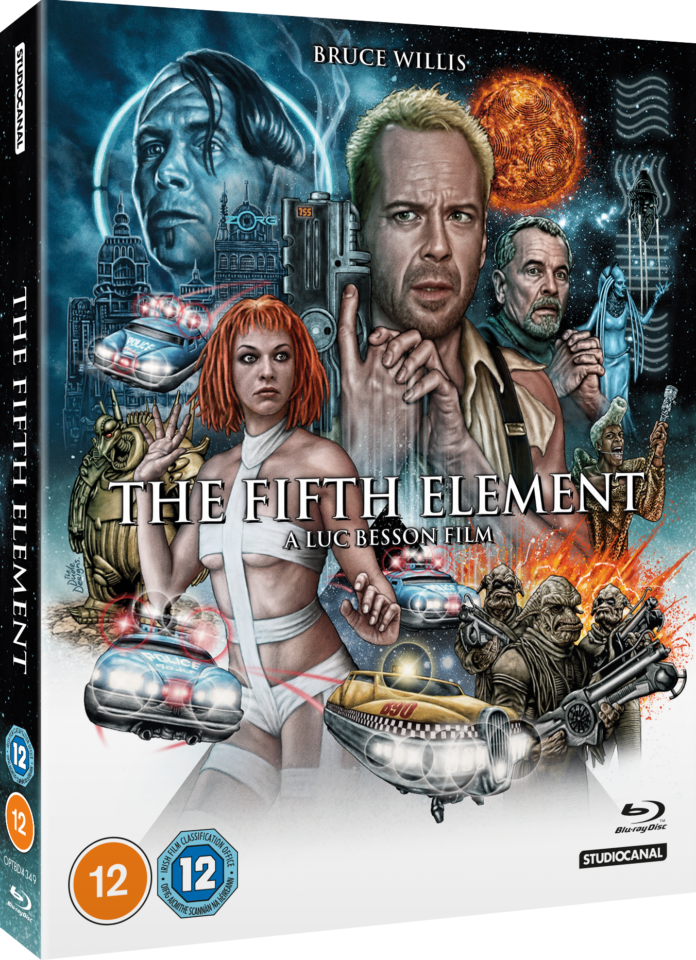 French film maker Luc Besson had achieved cult success with Subway and The Big Blue but would have huge commercial success with Leon (or ‘The Professional’ as it was known in the US). It would give him the necessary clout to make his next film which would be also be his most expensive film by far up to that point in his career. The film would feature a major Hollywood star, a supermodel and respected Shakespearean actor with costly visual effects, huge sets and all dressed by a renegade French fashion designer.  Titled, ‘ The Fifth Element ’ it was based on an early script Besson had started when he was a teenager.

Set in the 23rd century the universe is threatened by evil. The only hope for mankind is the Fifth Element, who comes to Earth every five thousand years to protect the humans with four stones of the four elements: Fire, Water, Earth and Air.  An alien spacecraft is bringing The Fifth Element back to Earth but it is destroyed by the evil Mangalores. However, a team of scientists use the DNA of the remains of the Fifth Element to rebuild the perfect being called Leeloo. She escapes from the laboratory and stumbles upon the taxi driver and former elite commando Major Korben Dallas that helps her to escape from the police and persuades him that she must meet Father Vito Cornelius to accomplish her mission. At the same time ‘the Evil’ uses the greedy and cruel Jean-Baptiste Emanuel Zorg and a team of mercenary aliens to retrieve the stones and avoid the protection of Leeloo. And whilst all this is going on Dallas has falls in love with Leeloo.

It was a hugely ambitious project for Besson but he had cast well. Willis was still a major star with recent appearances in hit films Pulp Fiction, Die Hard 3, & Twelve Monkeys (probably the only film that Willis doesn’t wear his trademark smirk) . He would play Hollywood good guy to Brit bad boy Gary Oldman who had been in Besson’s ‘Leon’ also and here sported one of the most bizarrely insane haircuts committed to celluloid. Adding a bit of acting kudos was Shakespearean actor, the late Ian Holm appearing in his first big budget blockbuster alongside supermodel Milla Jovovich in a role that had her dressed in bandages and looking like a lap dancer at a club for Egyptian mummies.  Supporting them were Luke Perry, comedian Lee Evans (in a throwaway role) and Bristol trip hop musician Tricky but unfortunately also appearing was Chris Tucker in an immensely irritating role as some sort of cult TV show presenter. The whole cast were dressed by Jean Paul Gaultier who had come to the world’s attention by dressing Madonna’s tits in a pair of pointy metallic ice cream cones and looking like a dalek’s wet dream and his costumes here were no less flamboyant. Filmed at Pinewood studios the sets (complimented by the stunning visual effects) were blown up in spectacular explosions one of which at the time was the largest to have been detonated inside a sound stage.

The Fifth Element is wildly original with its world’s presented in full daylight rather than the usual murky darkness of most sci-fi films with Besson throwing everything at the screen and whilst the story doesn’t always make a whole load of sense it had enough to hold attention and was a big success earning $264m. The film is now released on 4K Ultra HD, blu-ray and DVD looks great.