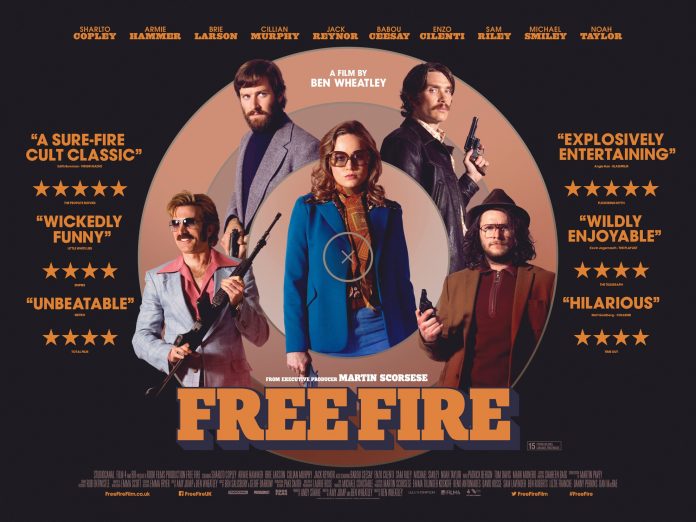 As an inducement for member’s to attend the Annual Pyromaniac’s Convention was an offer of free fire only for them to find that it’s the title of director Ben Wheatley’s new film.  Much like Reservoir Dogs its sets in a warehouse with a gang or in this case two gangs who have a spectacular fallout except that this is set in 1978 and has Brie Larson whose contact is middle man Armie Hammer who arranges a meet up with a South African gun runner in order to sell a whole stash of automatic weapons to Cillian Murphy’s IRA mob man. From the start it’s clear that many of the gang members are slightly unhinged with less than stable temperaments from Sam Riley (who is a shoe in for any bio-pic of drug addled dullard Pete Docherty) as a…..um….. drug addled dullard to Sharlto Copley’s equally unbalanced arms dealer determined to get his money regardless.  It’s all destined to end in failure from the off when Murphy finds that he’s being sold guns he didn’t ask for and the already tense atmosphere goes catastrophically awry and then the bullets fly for the next 90 minutes and no one escapes unscathed with stray bullets hitting arms,legs and heads. Initially there’s certainly a feeling that as each of them takes a hit that it really really hurts and the injuries force every character to scrabble around on the rubble strewn floor of the derelict factory. The sound as the bullets fly and ricochet is very impressive and the sound mix with conversations going on off camera is an impressive bit of sound editing and the chaos of the shoot out is further emphasised with handheld cameras throwing the audience in the thick of it. The problem starts as each character moves about and it’s difficult to get the geography of who is where and who is shooting at who.

Like Reservoir Dogs the characters are at the front and fore with Sharlto Copley’s arms dealer by far the best with his mangled South African accent blurting out some hilarious lines. Coming a close second is the rivalry between the always great Michael Smiley and Armie Hammer taunting each other whilst trying to shoot one another dead and the film could have benefitted from far more of their antagonistic banter. The rest of the cast fare less well with Brie Larson, as in KONG: Skull Island, the seemingly obligatory female in what really should be an all male cast. Cillian Murphy still needs a break out role which he doesn’t get here unlike Sam Riley who is best served as the heroin obsessed druggie.

For Ben Wheatley who has made some stand out films including ‘Kill List’ and ‘Sightseers’ but here turns his hand to what is a standard shoot out. Written by him and his long time collaborator Amy Jump, who is also his spouse, it doesn’t have the same snappy dialogue of Reservoir Dogs and neither does it have satisfying story hooks to drag you in, one of which only serves to really move the action elsewhere in the factory. Wheatley has kept his trademark violence with two characters suffering particularly  grisly demises but this is not as impressive as hoped for from a director who always has a different take on any genre he sets his sights on and this is more of a Saturday night ‘pizza and a six pack with the lads’ movie.