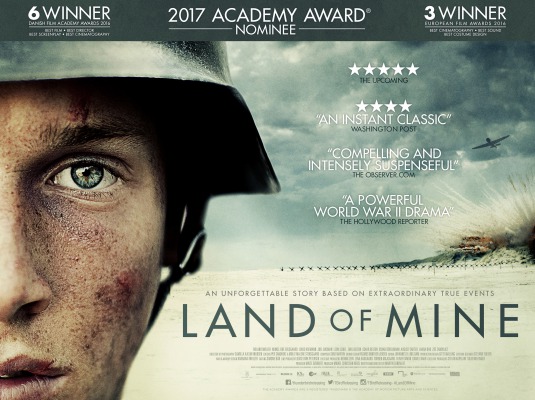 Michael Winner, the late film director and in later years fearsome restaurant critic, had a newspaper column which was renowned for its dismissal of what he considered lacklustre eateries and substandard dishes.  What’s not known is when he revisited the same restaurant just how much urine he consumed when ordering the soup and it’s that need for revenge that spurs, ‘Land of Mine’.  Set at the end of World War II it follows a Danish army sergeant put in charge of a bunch of teenage German POW’s who are used to clear a beach of land mines. Understandably the contempt for the Germans is understandable and right from the opening scene the Danish Sergeants animosity towards them is made clear as he singles out a POW being marched along the road to prison. His uncontrollable anger and frustration is meted out on anyone crossing what appears to be a near borderline psychotic sergeant. Frankly it’s like working for our Editor.

The sergeant is proud of his country but getting the defeated enemy to clear the mines gives the title a dual meaning. There’s a grim inevitability about some of the mine clearing scenes with some moments working better than others. What works so well here is the sergeants softening attitude towards the POW’s in his charge. These are, after all, only boys, far from home, hungry, and afraid of the dangerous task they’re doing bought home by one moment  where one is fatally injured and calls out for his mother. Bit by bit a father / son(s) relationship develops and the film shows just how easily dehumanised anyone can become to their oppressors once the tables have turned.

This was rightly Oscar nominated as Best Foreign film earlier this year and in turn it’s upsetting, tense and poignant and though a little overlong this is an engaging character study of a little know chapter in WWII.