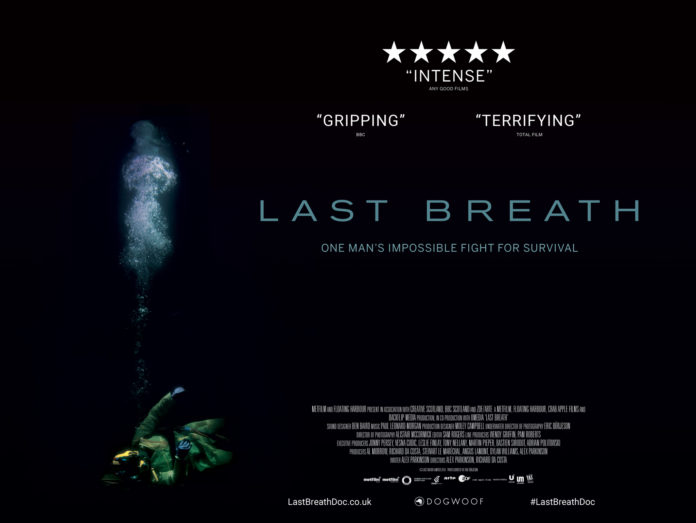 Many of the best documentaries are unknown true stories where you’re never sure what the outcome will be. Last Breath is one of those documentaries. Set in 2012 it follows the crew of the ship Topaz whose crew specialized in the repair of sea bed cables, and constructions and here three of the twelve divers employed to do such at the bottom of the North Sea specifically diver Chris Lemon and his two colleagues. Divers are prepped for work up to 28 days before being locked in saturation chambers where the air pressure is changed and the air they breathe is a mixture of helium and oxygen which enables everyone to indulge in their Joe Pasquale impression before they dive into the cold, dark depths of the sea. There can be few less appealing jobs apart from maybe dog food taster or Gemma Collins vajazzle hygienist.

Told in a series of talking heads with Chris Lemons colleagues of who were involved in this incident  most notably his fellow diver and their colleague who stays in the diving bell  managing the cables, oxygen feed and even a hot water tube that keeps them warm as they work in the icy depths. It’s literally an umbilical cord and their only life line. Aquaman this is not.

But with the increasingly sombre tone of all involved you know this is headed for disaster when the ship that the diving bell is attached struggles to maintain its position on the sea surface when the on board computer breaks down and the ship starts to drift in the storm and uses the diving bell and in turn the divers themselves as an anchor. What happens next would spoil what is an immensely involving, emotional and intense story with all the men beginning to crack as they recount what happens except for Chris Lemons fellow diver an oddly emotion-free man who understandably earned the nickname ‘the Vulcan’ from his crew mates. Last breath is true to its title and will have audiences as breathless as its divers in an extraordinary story.

After the Wedding – REVIEW