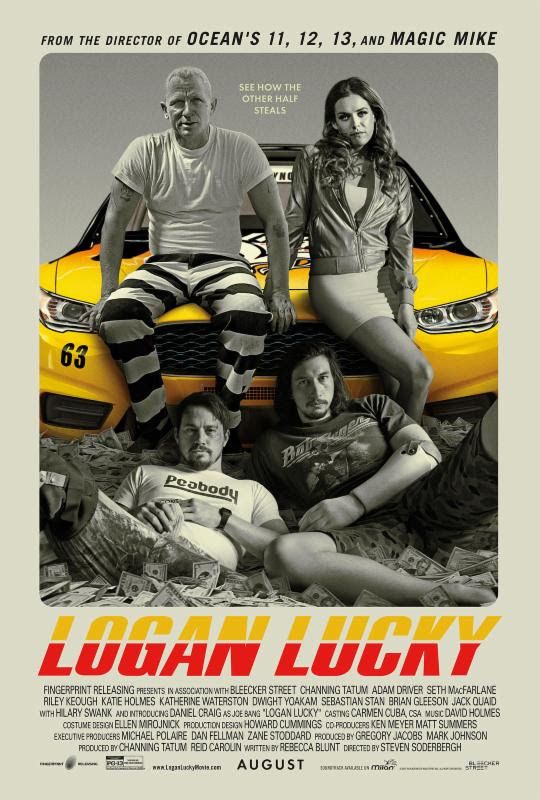 Four years ago Steven Soderburgh had said that he would retire from directing, a promise which lasted for about 20 minutes, because since the late nineties he has directed something every single year including the excellent Liberace biopic ‘Behind the Candelabra’ but now returns to the heist movie which served him so well with Oceans 11,12 & 13.  Logan Lucky replaces the glitz and glam with Southern halfwit hicks  led by Channing Tatum as a recently made redundant divorced father who dotes on his daughter but with his ex wife now threatening to move away with her  he hatches a plan with his one armed barman brother ( Adam Driver) to rob a car race track so as to fund his legal bill to oppose her. Add to this another set of brothers led by Daniel Craig as Jim Bang  who sports an outrageous bleach blond barnet matched only by his even more outrageous accent. He couldn’t be more removed from the suave Bond we know him as. Their plan is made more difficult by Jim Bang being in prison and so they have to get him out so as he can do his detonation work and then get him back into prison without anyone suspecting.

The problem with the plot is that though it is daft and open to failure at so many points it all runs relatively smoothly and what makes heist films so entertaining is not just the ingeniousness of the plot but also that it might go wrong at any point with unseen problems cropping up that threaten to throw a spanner in the works. There’s little of that sense of that  here and consequently there’s little tension with the film played mostly for laughs.

As might be expected Soderburgh has attracted a decent cast led by Tatum who also produces and is ably supported by Adam Driver whose one arm serves little plot purpose except novelty value. Almost unrecognisable is Seth MacFarlane with an atrocious English accent as an arrogant business owning race driver. The ‘actor with the terrible English accent’ seems to be a regular part in Soderburgh’s films  with Don Cheadle’s in the Ocean’s trilogy being jaw droppingly atrocious and making Dick van Dyke’s accent in Mary Poppins look like a masterclass.

This is the sort of genre that the Coen brothers have done so well and in fairness so has Soderburgh in the past but this all feels sluggish and disappointing from a director who has perhaps spent too much time working on multi episode TV series over the past few years before returning to feature films again with this. Better luck next time.