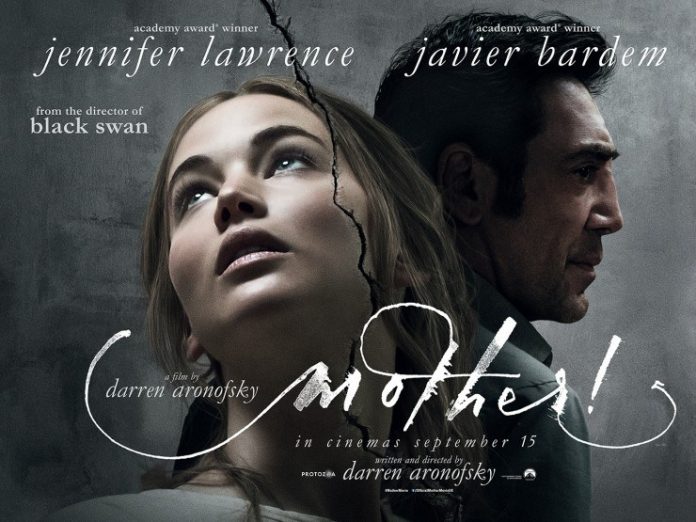 Any film with a noun as a title and an exclamation mark after it should be warning enough but Mother! is a Darren Aronofsky film the man who bought us Requiem for a Dream, The Wrestler and Black Swan, all great films with Oscar nominations so expectations are high.

Here he’s assembled another great cast with Jennifer Lawrence as the younger wife ( ‘A generation younger’ one character tells her) to Javier Bardem, a poet with writers block. In their beautiful but isolated home he tries to write whilst she renovates the house until Ed Harris turns up on their door and Bardem invites him to stay. A little put out that what is, essentially, a stranger staying with them Lawrence agrees until Harris’s wife Michelle Pfeiffier turns up on the door step too and more or less invites herself to stay as long as they wish at the behest of Bardem. It does not go down well with Lawrence who begins to feel like a stranger in her own home.

Aronowsky cleverly shoots this from Lawrence point of view and the camera is nearly always focussed on close ups of her which is a challenge for any actress. There’s not much love lost between her and Pfeiffer who seems to have been away from the screen for too long and their frosty exchanges underline the tension already in the house as Lawrence plasters the walls whilst Pfeiffer gets plastered on homemade booze.  Lawrence is keen to see them leave but soon finds that all manner of house guests turn up uninvited leaving her feeling helpless as Bardem welcomes all and sundry with open arms and she soon finds herself acting like a mother telling people to not go into rooms or to not touch ornaments or not sit on fitting and fixtures in the renovated house. It’s almost a rehearsal to be a real life mother to the baby she wants to have with Bardem.

The first two acts are engrossing enough and provoke enough curiosity as to where this is all going. Unfortunately it’s the third act where the wheels fall off as it descends into chaos and carnage. One character rightly asks, ‘What’s happening?’ a question which the audience will find themselves asking only too frequently as well as using their own exclamation mark when they say, ‘WTF!’

Essentially a home invasion film it’s as much about loss of control with obvious digs at fans of celebrities  but by the end this has become an overblown art house film that’s a bit too pleased with its cleverness.