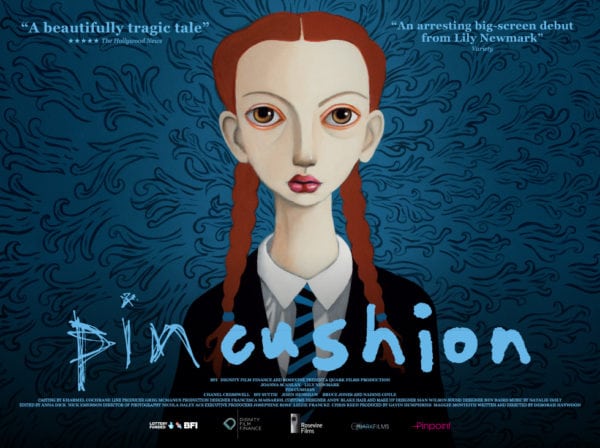 Initially we thought Pin Cushion would be a documentary about our Deputy Editor’s relentlessly unfaithful ex-wife  who’s had more pricks in her than…well….a pin cushion.  Instead the film follows mum Lyn (Joanna Scanlan) and her daughter Iona (Lily Newmark) who move to a new town to start a new life and make new friends.

Lyn dresses in a quirky manner presumably to divert attention from her  hunch back but from the off the hoped for friendly locals call her Quasimodo but she puts a brave face on it for Iona who will start a new school with all the stress that comes with that.  Lily Newmark, much like our Deputy Editor’s ex wife, is strikingly different in appearance but whereas his ex-wife has the sort of vacuous expression that would have doctors switching off her life support machine, Iona has an ethereal quality which sees her first day in school being bullied by three appalling chav schoolgirls. Led by Keeley, Chelsea & Stacie are all hoop earrings and too much make-up.  All three are no hopers getting drunk going to all night parties and little hope of passing their exams but they soon become frenemies of Iona who’s taken in by their pseudo friendship.  Iona, like any school kid wants to fit in and embraces them as friends when Keeley, a magnificently hateful girl played by the ironically named  Sacha Cordy-Nice who takes full advantage of Iona’s desperation.

Lyn on the other hand is also desperate to make friends and lends a set of ladders to a female neighbour who then  never returns them despite Lyn calling round to her house where they’re clearly never used. For both Lyn & Iona the hoped for friendships never materialise and for both of them it gets worse, much much worse. Pin Cushion makes it clear that there is no sense of community here and both mum and daughter retreat into their own fantasy worlds.

This is the debut feature of Deborah Haywood and like its onscreen talent and is one of the emerging films where key crew members are female too. Pin Cushion presents women either as victims, in the case of its leads, or as malicious perpetrators of general nastiness towards other women.

Haywood has assembled a quirky soundtrack with the beautifully fragile Sally Oldfield track ‘Mirrors’ opening the film on a note of hope but Lyn & Iona quickly find they cannot escape their victim status and its utterly heartbreaking what they go through initially so much so that you want to put your arms round them both and protect them from their own naivitey.  As the film goes on there are some very uncomfortable scenes to watch with the teenager Iona becoming increasingly aware of her own sexuality and in the process garnering an unenviable reputation amongst the school kids which is usually orchestrated by the 3 chav frenemies.  But even with those three one is frequently uncomfortable with how they bully whilst Keeley in one moment of openness reveals how she feels duty bound to behave like that due to the reputation she has garnered in the school. In a way she’s as much a victim of circumstance as Iona. It’s no better for Lyn either with one particularly upsetting scene where she attempts to self amputate the hump on her back.

Both leads are good with Scanlon better known for her TV comedy work and Newmark with some very difficult and awkward scenes to film as well as watch and there’s an underlying sense that all the characters are victims.

Initially this is a great first half but it does veer, not always convincingly, into much darker territory.  At times Pin Cushion borders on David Lynch territory with a shocking ending which seems a little too contrived but nonetheless this is a decent low budget British film that deserves to be seen.

Win a copy of ‘Crowhurst’ on dvd here…..EXPIRED