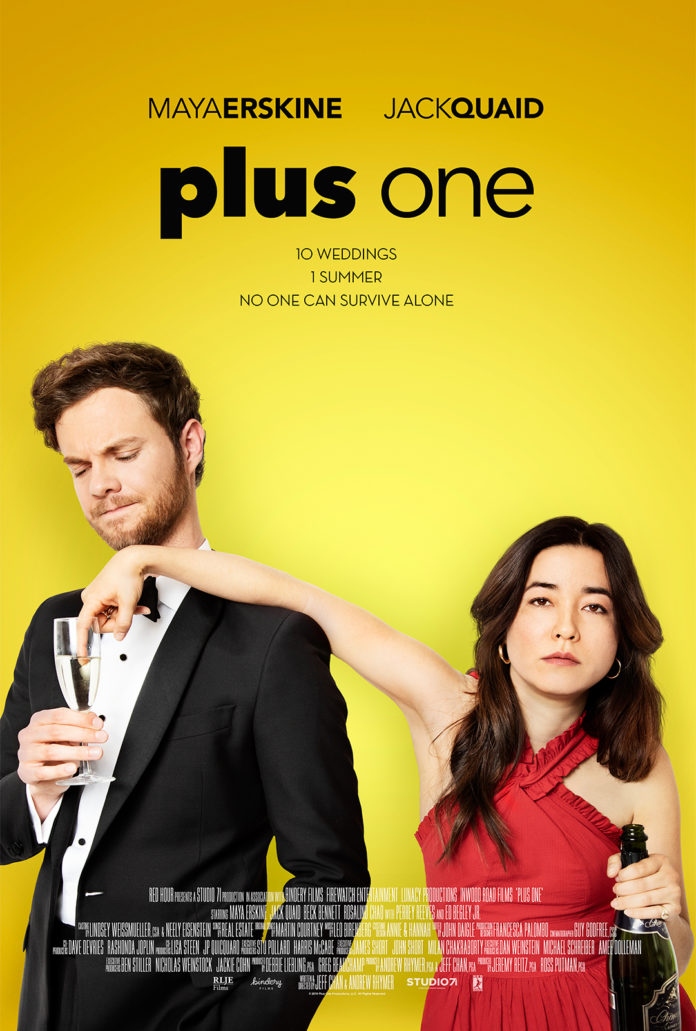 Plus One , rather than being the incremental way Joey Essex was taught maths, is that ubiquitous addendum to invites for occasion such as weddings which is what it refers to here. That Plus One is a regular part of the lives of Ben (Jack Quaid) and his friend Alice (Maya Erskine) who are both single and get through the occasion by each using the other as their respective plus one for the unusually high number of weddings they get invited . What is noticeable about these weddings is  not many others seen to be attending these weddings but that’s probably more to this being a low budget independent drama with little money to pay for background extras. So whilst Alice seems to be perpetually drunk and unsurprisingly single Ben is still not over the break up of his last relationship and each use one another as an emotional crutch so it will come as no surprise as to where their friendship is destined.

Executive produced by Ben Stiller this is similar to ‘4 Weddings and a funeral’ but without the funeral and here the dialogue is flat lacking the sparkle of Richard Curtis ‘4 Weddings’ script. Plus One is amusing rather than laugh out funny that doesn’t quite maintain interest all the way through. Although initially both are a bit irritating especially Alice who is embarrassingly boorish they do become more likeable. There’s no unexpected plot twists here but it does have one truism that those on the eternal quest for the perfect partner are never going to find them because, much like a critically acclaimed portrayal of  Lady Macbeth by Amanda Holden, it doesn’t exist.  It’s all summed up in Ben’s best man speech which acts as a neat denouement to a film which would have benefitted from a script polish

Here’st he Plus One trailer…….