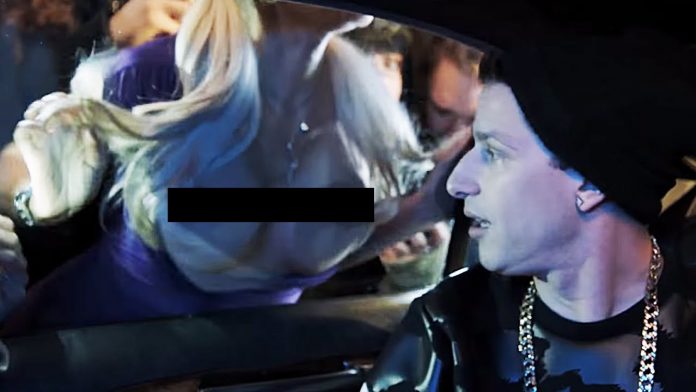 It’s not long now until the new series of ‘The X Factor’, the annual cacophony of tone deaf delusional halfwits paraded across our screens in front of music mogul Simon Cowell to smirk at as they pour out their hearts claiming that they’re entering the talent show as it’s what their recently deceased grandmother would have wanted when the truth is that what their ill grandmother really wanted was for the family to keep the hospital’s life support machine switched on.

So lampooning all those shows and especially the spate of recent tour documentary’s we’ve had from the likes of Justin Beiber is Andy Samberg and his co writer performers Akiva Shaffer and Jorma Taccone taking them to task with their self obsessed quest to ‘be real’ . 30 years ago the bar was set high with the seminal, ‘This is Spinal Tap’ which skewered  the music industry so successfully nearly everything after has been in its shadow. ‘Popstar’ fares well with Samberg as the ludicrously monikered Connor4Real having originally formed a boyband called the Style Boyz with his 2 school friends which he left to go solo and after a bestselling solo album it now follows the launch of his anticipated second album and tour. Inevitably it goes disastrously and having retained only one of his friends in his original group to be his on stage DJ the other friend has retired totally from the industry and become a farmer still smarting from Connors refusal to acknowledge his input into the songs that made them all stars.

There are some extremely funny moments in this with some of the songs being especially good notably, ‘Equal Rights’ where the dopey singer professes his support for same sex relationship whilst at the same time wanting everyone to know that he’s straight in every alternate line and blurting out ‘I’m not gay!’  whenever he can. Much work has gone into the parody songs and another highlight is the song, ‘Bin Laden’ an utterly misguided love song hilarious in its stupidity.

Taking the mock doc approach the film is absolutely chock full of star cameos many of them taking pot shots at their own persona’s including good scenes with Mariah Carey. Not all the supporting players are used as effectively as they could be : The Inbetweeners’ James Buckley looking like Jared Leto in a hugely underused role as one of Connor’s hangers on just seems to well…..hang around in the background.

The tour lurches from crisis to crisis with poor record sales and it doesn’t improve when he takes on board another rapper as a support act only to find the act more popular than him and a catastrophic & humiliating on stage costume change finds him ridiculed. It comes as no surprise plot wise that there’s the usual ‘getting the band back together’ for a triumphant return and that’s part of the problem in this largely hit and miss affair which is perhaps too sweet natured to really savage its target.