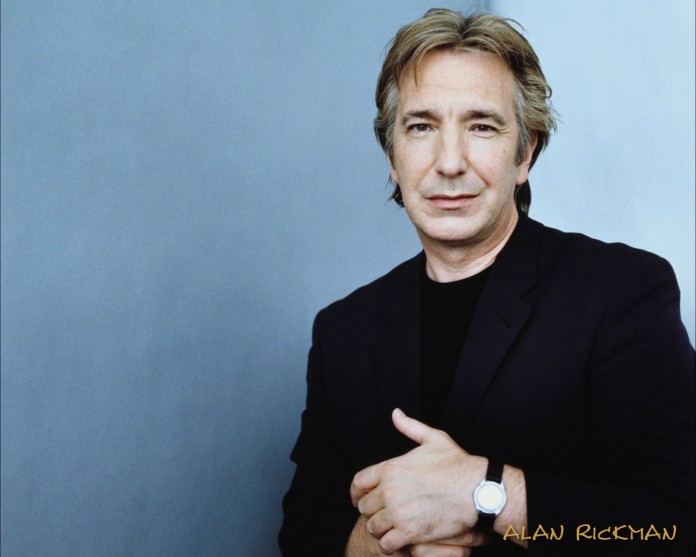 After the recent death of David Bowie it seems unfair that the world has been robbed of another talent at the same age and from cancer again. Rickman was undoubtedly one of our favourite actors with his distinctive languid tones being a gift to impressionists everywhere.

After the death of his father he was raised from the age of eight by his mother with his three siblings. Initially trained at the Royal College of Art and he set up a company with friends but quit after a few years to work as an assistant stage manager before finally going to RADA at 26. After graduating he spent a season at the RSC before TV tempted him to the small screen but it was a film role in 1988 that really made him. It was as Hans Gruber in Die Hard that bought him to international attention and worldwide fame. It was a perfect storm – a great director at the top of his game, a Hollywood star in his breakout film, a decent action script and a villainous role played so well that it would be the bar by which many future such roles would be measured. It was also a role that many would also associate with him for years afterwards. After a short return to TV he played a ghost opposite Juliet Stevenson’s grieving widow in the BBC film’ Truly Madly Deeply’ and for which he was nominated for a BAFTA.

Then it was time to chew scenery as the Sheriff of Nottingham in Robin Hood a role he relished, memorably spitting out the line, ‘No more merciful beheadings and call off Christmas!’ It was probably as near to doing pantomime as he ever got. He followed this with memorable roles in ‘Galaxy Quest’, and Kevin Smith’s, ‘Dogma’, before taking the role as Severus Snape, a character which would redefine him for a whole new generation. Despite the Potter franchise turning out a film almost every year he still managed to fit in other roles in which he stood out perhaps best of all in ‘Love Actually’. This was yet another film that he appeared in with Emma Thompson having also made Sense & Sensibility, Judas Kiss and also in his directorial debut, The Winter Guest. In Sense & Sensibility he also appeared with Kate Winslet an actress he would later direct in ‘A Little Chaos’ his second and last film as a director.

His distinctive voice made him a obvious choice for films in which he did not even appear and was instantly recognisable in ‘A Fish Tale’, and especially as Marvin the paranoid android in A Hitchhikers Guide to the Galaxy and what will be his last film to be released, Alice through the Looking Glass. He was renowned for not wanting to talk about his craft but equally renowned for being hard working on set. He could make even the most throwaway of lines heavy with gravitas or cynically hilarious. Incredibly never nominated for an Academy Award and only winning one Golden Globe for a TV series Rasputin in 1997 but for many he was a winner when it came to any role he took.

We will miss him immensely