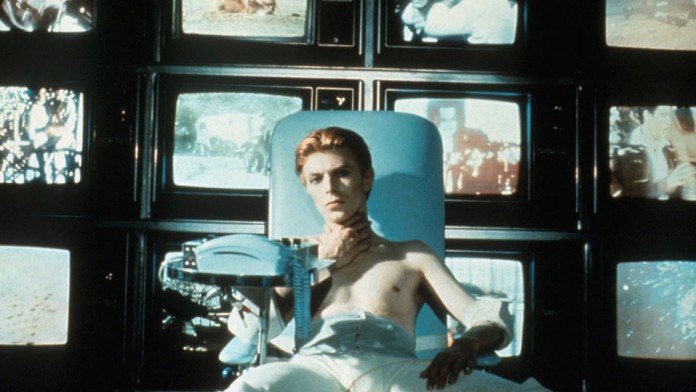 For many it’s his appearance as the Goblin King in ‘Labyrinth’ which many will remember albeit with the stunning Jennifer Connolly as the other lead the rest of the cast were literally a bunch of muppets. Thankfully other films he played the lead in did not have the rest of the cast with hands up their bottoms!

‘The Man who fell to Earth’ was his first lead and suited the odd eyed actor perfectly with his other worldly presence and remains possibly his best and most iconic role in what has now become a cult film.

But credit must also be given to other major roles he played in ‘The Hunger’, ‘Merry Christmas Mr Lawrence’, and even ‘Absolute Beginners’ a film that was unfairly blamed for the demise of the British film industry in the 80’s.

He worked with a number of notable film directors including Tony Scott, Nicholas Roeg, John Landis, David Lynch, Christopher Nolan and even Martin Scorcese in ‘The Last temptation of Christ’.

Bowie would probably be the first to admit that he was not the greatest of actors and was never going to bother the Academy Awards although he was nominated for a Golden Globe and Bafta for songs he had written.

Perhaps his best performances were in cameo roles of which he did many. Our favourites were in ‘Zoolander’, Ricky Gervais TV series, ‘Extras’, and John Landis’ cameo strewn film, ‘Into the Night’ with his most outlandish performance probably as Andy Warhol in 1993’s ‘Basquiet’ or voicing a character for SpongeBob Squarepants.

His interest in film was passed down to his son Duncan Jones whose debut, ‘Moon’ was rightfully award winning and his next film ‘WarCraft’ out this Summer looks epic and would no doubt make his father proud.

Whatever he was, Bowie was something of a maverick genius in music if not in film and his passing leaves a void which the likes of Lady Gaga struggle and fail to fill.

He was a hero and it was more than just for one day.