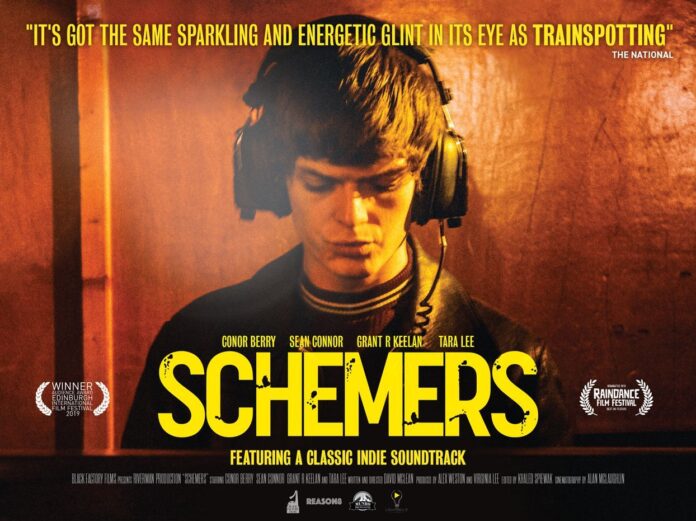 Cultural giant that our Editor is he tells that that whenever he thinks of Scotland he thinks of shortbread, Irn Brew and of course that traditional Glasgow favourite …….heroin. All deep fried.  And that’s very much what we were expecting when we went to see new film Schemers which is set in Dundee and yet is not about a plot to steal the recipe for the famous cake …..and then deep fry it. (‘You’re fired!’ – Ed). Instead Schemers is based on the true story of Dave McClean, a gig promoter who started off with wannabe bands many of which that went on to huge success. This is the story of the very early days of his career which almost never happened.

Set in 1982 Davie (Conor Berry) is a bit of a hustler making a few quid here and there on whatever he can and blowing it in the bookies. A bit of a dreamer Davie’s  life is about hanging about with his mates Scot (Sean Connor) and Pike (Blair Robertson) downing cheap drinks, playing pool and getting lucky with the ladies which Davie does one night quickly discovering that a girl he picks up at a club and beds has a psychotic boyfriend who hunts him own wherever he can – not a difficult task in a small town – and when he does its at a football game where Davie plays and hopes to make a career only for said boyfriend to breaks his leg mid game. ….. it must be every premiership players nightmare when dalliances with another players WAG is uncovered. 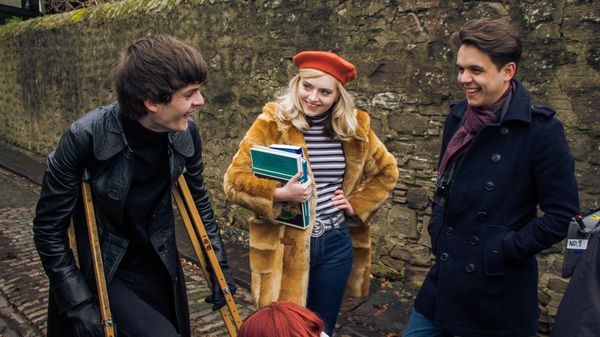 Laid up in hospital he falls for Shona (Tara Lee) a nurse on his ward and seemingly unobtainable to all the local lads but he persists and persuades her to attend a local disco he organises with the offer of free tickets.  Like their relationship his career as a promoter is in its early stages and he begins to put on gigs for bands paying them all a few quid anda few cans of brew thrown in for goo measure….. yet these bands include Simple Minds and there’s a throwaway joke about U2.  The success of the  three schemers unavoidably comes to the attention o local gangster Fergie (Alastair Thomson Mills) with a penchant for owning venues and dispensing violence and starts to take a bigger and bigger cut of Davie’s profits.  Inevitably the schemers and the gangsters are going to have a brutal falling out because for Fergie it’s all about money and it’s the same for Davie too who , tired of small time gigs, pushes the boat out on a widely ambitious punt to lay on an Iron Maiden gig. In debt to Fergie and even deeper in debt to book the band he is hugely out of his depth with a professional band. It’s a massive gamble where the three have everything to lose as it builds towards the make or break gig.

Schemers is arguably a bit of a vanity project as not only has Dave Mclean written the autobiographical script but he directs it too…….and does a pretty decent job too even if it is at times a little too indebted to Trainspotting. All three are likeable leads and Tara Lee as the independently minded girlfriend feels a bit too sidelined in a role which should have seen her dump Davie. But the production detail is great with crumpled pound notes (remember them), vinyl records, cheap drinks and an era when you could smoke in the pub. Mclean has assembled a great soundtrack of Scottish bands of the time such as The Associates (Party Fears 2 still sounds as fantastic today as it did on release), The Proclaimers and Simple Minds but he even throws in Hawkwind, Boney M and Dead Kennedys . It’s a decent 91 minutes and there’s surely a sequel here about Mclean’s fully fledged career as a promoter because there ‘s a film crying out to be made about big band egos, ridiculous rider’s and dodgy deals. 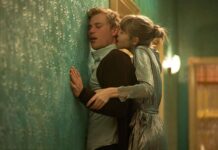 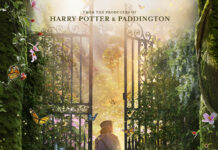