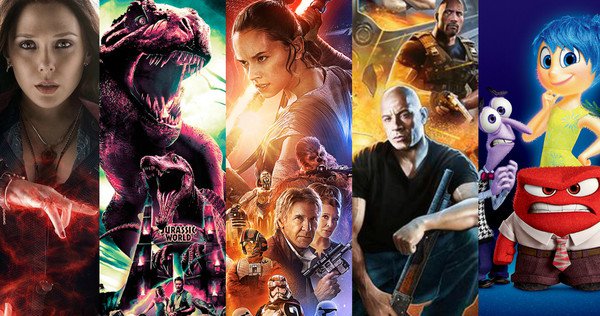 The studio with the biggest box office gross usually changes year to year and much is driven by their Summer blockbusters as well as their surprise low budget hits. 2015 was a superb year for Universal studios with just about all their films doing huge business starting with ‘50 Shades of Grey’ making $571m worldwide then ‘Fast and furious 7’ making $1.5billion an extraordinary amount but even that  was obliterated by ‘Jurassic World’ with $1.67 billion. Added to all that was ‘Minions’ which made $1.1 billion and then to a far lesser degree were ‘Pitch Perfect 2’, ‘Straight Outta Compton’, & ‘Ted 2’ each of which made over $200m. In fairness the studio was not without it duds. Michael Mann’s ‘Blackhat’ at $70m budget made only $19m and Angelina Jolie’s, ‘By the sea’ costing $10m only made $3.3m. Both of these were due to not wanting to turn down projects with a respected director like Michael Mann and the latter being a rumoured offer to keep Jolie onside for a projected role in the studios classic monster relaunch over the coming years with them wanting her to be involved with  ‘Bride of Frankenstein’.

2015 had not been a good year for 20th Century Fox with ‘Fantastic Four’  bombing badly and ‘Victor Frankenstein’ performing poorly too. However 2014 had been a great year for them outperforming all the other studios with,  ‘X-men Days of Future Past’ earning $747m, Dawn of the Planet of the Apes earning $710m and ‘How to Train your Dragon 2’ earning them $621m. Even Rio 2 earned $500m and the $12m budgeted ‘Fault in our Stars’ went on to earn $307m worldwide – a budget to profit ratio that every studio loves.

2016 is proving to be a good year for them too with ‘Deadpool’ being a success far beyond what they were expecting having already taken almost $750m, ‘The Revenant’ taking over $500m after its success at the Oscars and even ‘Kung Fu Panda 3’ already having taken over $400m with the new X –Men film just opening .

But all eyes will surely be on Disney this year. In the past it had found its animated arm far outpaced by Pixar with its string of hits and keeping to the old adage if you can’t beat them join them Disney did exactly that except they bought them. It’s served them well with every Pixar film being a hit although it came to a halt with ‘The Good Dinosaur’ which has struggled to break even. But the purchase of Pixar was just the start of a spending spree for the studio and their CEO set his eyes on Marvel which was churning out superhero hit after superhero hit and by 2012 Disney had bought them too and unleashed the ‘Avengers Assemble’ which made $1.5 billion excluding the merchandising. 2013 saw ‘Iron Man 3’ & ‘Thor’ although ‘The Lone Ranger’ dented profits and the failure of ‘John Carter’ the year before was still fresh in the shareholders memories. So then the deal of the century was made they brokered a deal to buy the Star Wars franchise with Indiana Jones thrown in too. It cost the studio a whopping $4billion. It was a deal that now looks cheap with the first new film in the franchise ‘The Force Awakens’ making over $2billion just in cinemas before it was even released on dvd and that excludes merchandising and the theme park which begins construction soon at Disney World. For Disney the money is pouring in as ‘Avengers ; Age of Ultron’ made $1.4billion, ‘Inside Out’ made $856m even ‘Ant Man’ made $519m. The only blip in this was ‘Tomorrowland’ costing a huge $190m but making only$209m worldwide.

The studio looks well placed with the recent announcement of a 5th Indianna Jones film and they have planned 10 films for the Star Wars including spin offs. Their next Pixar film, a sequel to ‘Finding Nemo ‘ is out this Summer and production on ‘Toy Story 4’ is already underway.

But will the appeal of superheros last?  Spielberg himself has said that he regards it all as somewhat cyclical and in fairness Marvel’s run can’t last forever with Avengers : Age of Ultron taking a bit of a critical mauling and the good dinosaur faring poorly at the box office too. Warners must be hoping that he’s wrong with much resting on their projected Justice League franchise because 2015 for them was not great with ‘Jupiter Ascending’ being booted out of its Summer 2015 release spot and faring badly adding yet another duck to the Wachowski’s filmography, (‘Speed Racer’, Cloud Atlas’) though luckily Warners had the critically revered and crowd adored multi Oscar nominated  ‘Mad Max: Fury Road’ which took away from the failure of ‘The Man from Uncle’ barely making  $110m worldwide.

Respected screenwriter William Goldman said that’ No one knows anything in Hollywood’ when it came to knowing what would be a success and looking at all these titles he’d be right – a film about sadomasochistic sex?, yellow animated tic tacs?, a foul mouthed superhero? Who knew?

It’s small wonder that Heads of Studios these days rarely have long careers in that position.