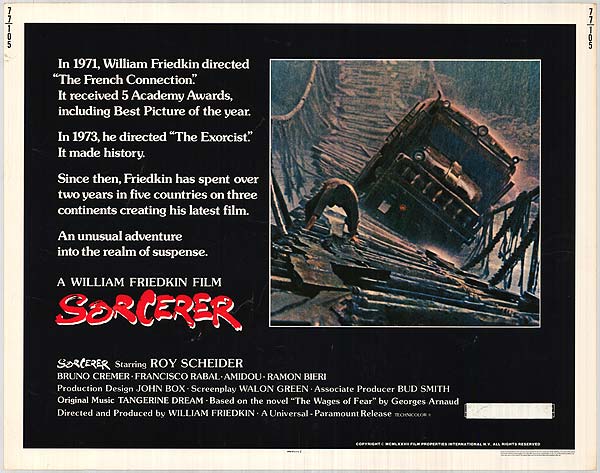 Director William Friedkin had had a brilliant few years in the early seventies winning a Best Director Oscar for The French Connection and then going on to make what is generally regarded as the scariest horror film ever The Exorcist for which he was also nominated for an Oscar. It was to be four years before he made his next film ‘Sorcerer’ a bit of an odd title for a film about about four men drawn from the US, France, Israel & South America. All four have different reasons for fleeing their home countries to meet up in an anonymous South American oil mining field and all needing the money to get out and move on. In many ways this is a film typical of the seventies with the four disparate strands being slowly drawn together one of which is in French with subtitles and led many US audiences in the seventies to complain thinking they’d paid to see a foreign film. It’s understandable as their back stories take up the first half of the film before the main story kicks in. The oil field is blown up in a terrorist bombing and to contain the huge fire that the oil field has become they must again blow up the oil supply to stop the fire. To do this the oil field manager needs some highly unstable and volatile nitro-glycerin to be transported over two hundred miles through the jungle by four men. In return the men, if they survive, will get the money they need to flee the country.

It’s a testament to Friedkin that this is a thrilling film if you can bear with it because the story of its making is as compelling as that which he put on screen. Roy Scheider, who was hot off the success of Jaws, had replaced Steve McQueen at the last moment but in fairness this is a largely wordless film for nearly all concerned and Friedkin is firmly focussed on the action. If anything the four leads are as distinguished by their noses as anything else  because here Scheider has a nose that seems to run from the top of his forehead, whilst Bruno Cremer  has a huge bulbous nose and  Amidou, a moroccan actor and Francisco Rabal are equally distinctive. Unfortunately all four leads died some years ago and its only Friedkin who, at 82 years old, can recount the turmoil of making the film notably an utterly riveting scene where the explosive laden trucks cross the most rickety bridge ever committed to celluloid during a raging storm as a river breaks. It’s a truly incredible scene that took months to film due to all manner of natural disasters. In an age of CGI laden films here is a scene that at the time could not be done any other way except practically and its is one of the highlights of the film.

Initially shunned by audiences it was also cut down by the studio by half an hour and this 40th anniversary release has been restored to its former glory and captures perfectly the grimy sweaty heat of the location. Based on The Wages of Fear there is actually precious little characterisation here, it’s all about the spectacle which is handled with aplomb despite a soundtrack by 70’s synth maestros Tangerine Dream which does date the film. Despite an unintentionally comic moment at the end where one of the actors has a look on his face that beams ‘I-can’t-quite-believe-I’m doing-this’, Sorcerer is an unjustly forgotten classic bit of seventies cinema.