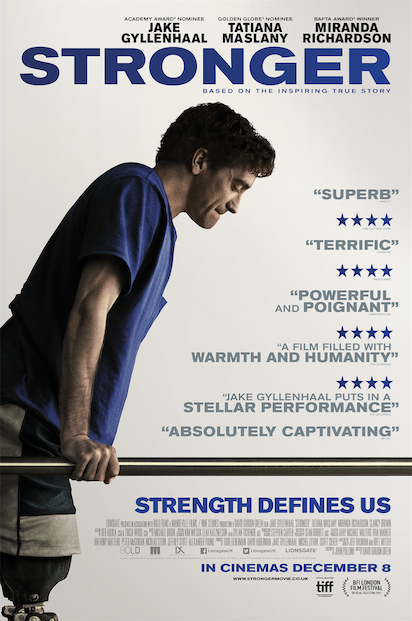 When Robbie Williams acrimoniously left Take That one of his first singles was called Strong, a bit of a dig at the rest of the group, so when Gary Barlow went solo one of his first singles was Stronger , a  dig back at Robbie. So when Robbie’s follow up single, ‘My dad’s bigger than your dad’, came out…  (‘What? You’re making this up now!’ – Ed)…. Anyway you’ll be pleased to know that Stronger is not the story of the feuding pop singers but is the true story about Jeff Bauman one of the victims of the Boston marathon bombing. Jake Gyllenhaal plays Bauman a listless supermarket worker still hurting from his recent break up from his girlfriend Erin (Tatiana Maslany). Bumping into her at a bar and finding she’s about to run the city’s marathon he promises to go along and support her at the finishing line. Clutching his hand written sign he unwittingly finds himself in blast range of the terrorist’s bomb when it goes off.

The explosion and the build up is covered in a low key matter of fact way but the film is very much about the after effects and Bauman is rushed to hospital with his mum (the always great Miranda Richardson) and rest of his family quickly arriving. Tragically surgeons have to amputate both his legs from the knee down and it’s his ex-girlfriend Erin who also rushes back to see. Inevitably, slowly but surely, their love is rekindled as she nurses him through his trauma as he battles his own demons.

Gyllenhal’s Bauman suffers terrible mood swings veering through a range of emotions nearly all negative: anger , self loathing, disillusion, drowning his sorrows in drink and generally alienating all those close to him. Yet at the same time his tragedy is leapt on by the media and its ‘Boston strong’ motto and he reluctantly finds himself trotted out at the start of sports matches waving a US flag with a stoic smile.  Initially a happy go lucky figure and a bit of a love sick puppy he becomes less sympathetic raging at the hand that life has dealt him.  But it’s understandable that anyone would feel so angry given his predicament and the film doesn’t scrimp on the detail in how he is forced to live his life from a wheelchair and there’s several scenes where he has struggles to use a toilet which other films would steer away from but makes his fury understandable.  It’s a strain on the relationship with his girl friend who becomes pregnant which only adds extra stress on the pressure cooker environment of the flat they share with his mother who’s resentful of her.

This plays like a companion  piece to the excellent ‘Patriots Day’ which centred round the hunt for the terrorists whereas as ‘Stronger’ is far more of a human drama covering the impact of the bombing on its victims.

Gyllenhal has turned in some great performances over the past few years with films like Nocturnal Animals, Southpaw, End of Watch and especially Nightcrawler and this is another that he can add to an increasingly lengthening list of stolid performances. It’s not quite the tearjerker you might expect it to be but it proves that Gyllenhaal is increasingly turning in great performances and is becoming one of the best actors of his generation.