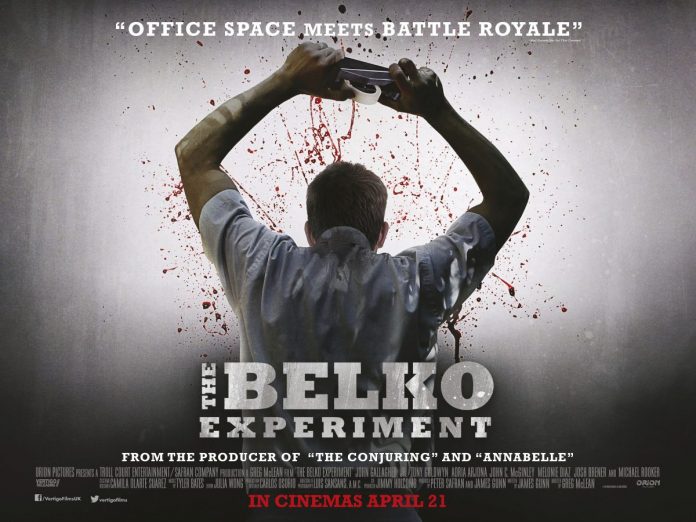 Unlike the Google offices which have a reception and staff area which have all manner of toys and games our own office is lucky to have a coffee machine which rarely works and when it does it dispenses not sun roasted coffee from a tropical idyll but third degree burns as it spurts scalding hot water over the crotch of your trousers leaving you wandering around the office looking like you’ve soiled yourself. Either way our office is certainly better than the one featured in The Belko Experiment. Set in an anonymous South American country the employees go about their business with the usual flirty romances and thinly veiled rivalries. This being a Blumhouse Production, masters of the low budget, high return horror film you know this isn’t going to end well so it’s hardly a surprise when over the intercom an anonymous voice tells all 80 employees that they must kill 30 of their colleagues within a certain time or 60 of them will die as each has unwittingly had a small explosive embedded in their heads (something our Editor has tried persuading us to have). Not that they can escape as the entire building is locked down with steel shutters over every window and door and the whole building covered in covert CCTV.

Slightly bemused by it all the employees discover that the threat is only too real when one of the employees heads explodes and mass hysteria understandably sets in.  There is something of a Lord of the Flies feel to it to begin with as employees start to divide into groups with Mike (John Gallagher Jr) leading the, ‘Hey, let’s work together and we can get out of this’ brigade whereas Barry the boss adopts a kill or be killed attitude picking out those he deems as the weak and /or least essential employees.  And so follows some extremely bloody and at times utterly brutal deaths as the intercom voice ups the ante with the number that must be killed in a certain time frame and when some of them stumble across some weapons it gives certain employees an advantage. Quite why an office would have weapons is quickly glossed over – the only weapon we have is the Editors breath after gorging himself on one of his pickled onion, marmite and garlic sandwiches (‘Rubbish!…. I have rolls’ – Ed).

With 80 employees there’s certainly scope for some grim deaths and whether it be exploding heads or office stationary used for non office purposes it becomes a splatterfest in an orgy of killing which becomes so relentless that the film loses tension apart from a grim scene in the office reception where employees are chosen to be executed and has undertones of Nazism about it though written by James Gunn the man behind ‘Guardians of the Galaxy’ it is done with a certain black humour as people are offed to a soundtrack of Beach Boys’ California Dreaming sung in Spanish. Gunn has previously written the underrated comedy horror ‘Slither’ and continues his subversive humour here with the company logo, ‘Bringing the World Together’ frequently glimpsed in the background as the employees go about slaughtering each other.

As the chaos descends and the quandry of what would you do in such a situation is always at the fore the characters which you should be rooting for, Mike and Leandra (Adria Arjona) are not really engaging enough and their obligatory romance in the face of aversity never really convinces.

Directed by Greg Mclean who was behind Wolf Creek 1 & 2 this is his first film that he has not written himself and he carries out the visceral thrills well enough and at 88 minutes this is exactly the right length but despite a decent twist in the tale end shot it doesn’t manage to sustain the tension as much as it should.