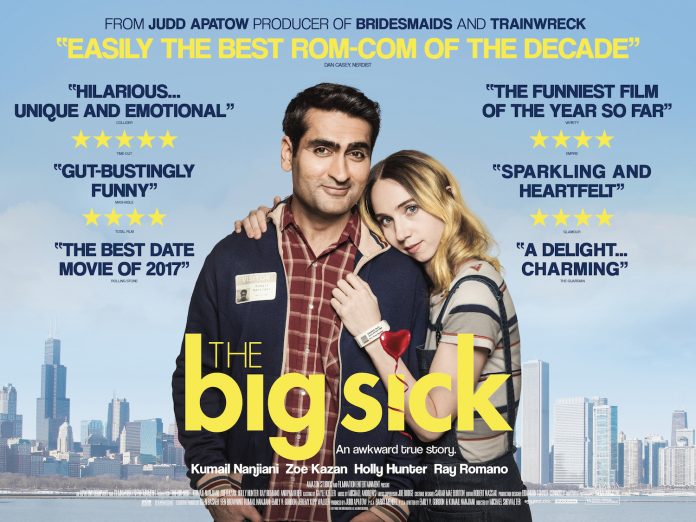 Some film titles must be a marketing nightmare. The horror film ‘Brain Damage’ springs to mind though frankly The Beaver and Free Willy were definitely disappointments for the Editor when he found what they were actually about. The Big Sick is not quite the vomit fest that might be expected but as it’s a Judd Apatow produced film whose previous productions include Trainwreck, Anchorman 2, The 40 year old Virgin, & Bridesmaids you know what to expect. H has a  proven track record in bringing comedians to the screen who have a screenplay in their back pocket and now it’s the turn of Kumail Nanjani who here plays a version of himself as a struggling to establish himself stand up comedian with a self deprecating sense of humour about his fellow US citizens perceiving him as  a terrorist in the making whereas the truth is he’s like any other US Asian immigrant trying to make his way in a new country and embracing Western culture whilst his parents are keen to maintain their own customs which here consists of trying to arrange a marriage for their son. It’s these scenes at the family dinner table where the door bell rings and it just so happens to be a young asian female who his mother assures him, ‘just happens to be passing by’ which have many of the laughs . The twist here is that Kumail already has a secret girlfriend a girl called Emily (Zoe Kazan)  who also happens to be, shock! horror! ……white!

So what follows is a comedy about interracial relationship except Kumail ‘s script pulls the rug from under your feet when just after they split up she has an accident and falls into a coma. Guilt, naturally,  draws him back to her hospital bed along with her parents played by Ray Romano who can’t help talk to him about 9/11 and Holly Hunter who is splendidly waspish and steals nearly every scene she is in. The angst they all go through becomes the mainstay of the film and it’s here, like so many of Apatow’s films, that the comedy takes an abrupt turn into a bittersweet human drama.

For all the hype that Apatow’s comedy films get it’s chuckles rather than big belly laughs of which there are a couple here but like so many of his comedies from first time feature comedians it’s just too long. Kumail Nunjiani is a likeable enough but presence but doesn’t have the screen presence that someone like Amy Schumer commands even if some of the gags in his stand up don’t always hit the mark but the jokes about cultural differences generally are on point. Like The Last Viceroy earlier this year this is another true story from its makers based on Kumail’s real life marriage and as flattering  as this must be for his wife for the rest of us it would have benefited from a sharper, shorter script and it works best when pointing out cultural intolerance by others.