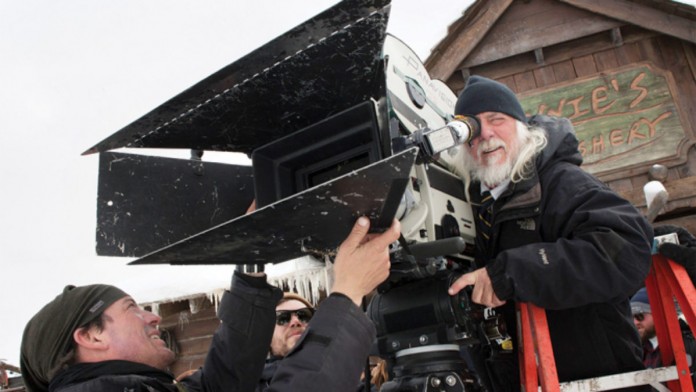 As is usual for Tarantino movies it’s distributed by The Weinstein Company and there’s a lot riding on this financially mainly due to old banana chin himself insisting that it’s shown in 70mm – which is great for big landscapes but much of the trailer suggests that a large portion of it is set inside a log cabin – anyway I digress.

The 70mm run is for two weeks in the US and will cost a fortune as each cinema needs installation specialists for the projector (everything is digital now) and is estimated to cost $60-80,000 per cinema and one hundred screens across North America ran 70mm roadshow. It was the largest such opening for a 70mm film since 1992. In comparison “Interstellar” opened on just eleven comparable screens, while “The Master” ran on sixteen.

The Weinstein Company is footing the bill hiring the firm Boston Light & Sound who have spent eighteen months arranging for old projectors to be procured, purchased and refurbished and new lenses to be made for theaters. A tall order as most old projectors were destroyed when cinemas converted to digital.

Few original projectors remain but those they have got hold of means that the Weinstein Company will have about 120 complete systems at their disposal by the end. What they’ll do with them at the end of the film’s run is anyone’s guess as the new installations are temporary.

Stakes are high for the distributor who need it to be a hit having laid off 20% of their staff recently.