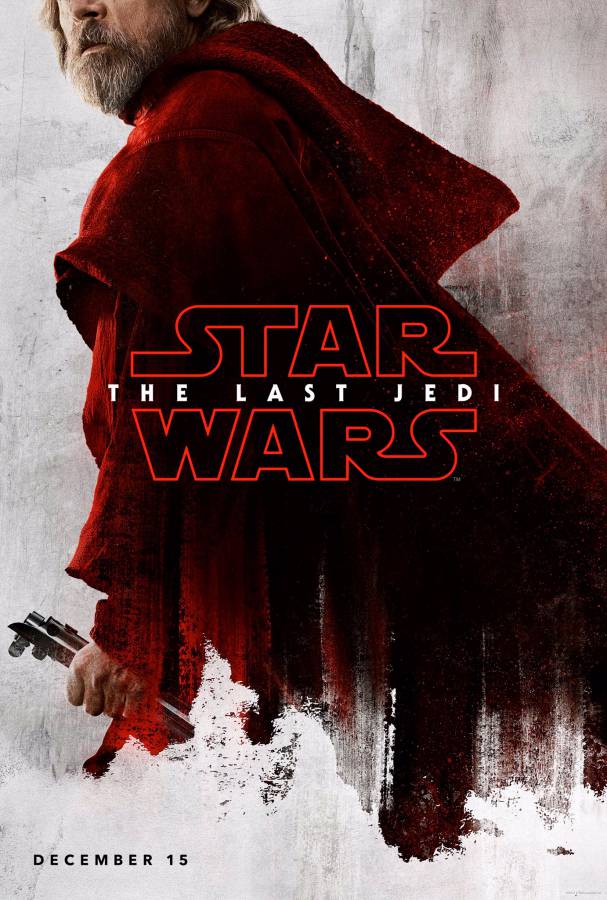 So ‘The Last Jedi’ or Star Wars 8 is now with us vying to get somewhere near the immense box office success of ‘The Force Awakens’ $2.2billion worldwide haul. Writing as well as directing is Rian Johnson whose films have included the under rated, ‘Looper’ and a few episodes of ‘Breaking Bad’ and he picks up almost immediately from the end of ‘The Force Awakens’ with Leia and the rebels facing off against an armada of the Empire’s star destroyers in a space battle that’s as exciting as we’ve come to expect from the franchise. It’s a battle that leaves the rebels fleeing in hyperspace for cover hoping to outrun the Empire now headed up General Snoke played by Andy Serkis and assisted by his protégé Kylo Ren (Adam Driver). Serkis turns in his usual reliable mo-cap  performance with Snoke hideously scarred and disfigured and digitally realized to look like a melon well past its sell by date.

But what fans will be really looking forward to is the return of Luke Skywalker. With ‘The Force Awakens’ bringing Harrison Ford’s Han Solo back it left only Mark Hamill to reprise the role for which he will always be known having spent his subsequent career providing voices for Batman animated films.  Glimpsed in the final scene of TFA here it’s him and Rey (Daisy Ridley) who share half the film as she encourages him to join the rebels and fight the Empire but specifically defeat Kylo Ren. Unbeknown to her Luke has a history with Ren which him reluctant to return and this backstory hangs heavy over the film.  It’s this story that has Luke training her in the Force and Rey pleading for him to return. Much of Rey and Luke’s scenes are set on his small craggy island  inhabited by the doe eyed puffballs that are there to give BB-8 a run in the cuteness stakes but also an eye on the soft toy merchandising market.  They’re not quite as cute as the film makers might have hoped though thankfully not as irritating as the CGI monstrosity that was Jar Jar Binks. It’s here also that Rey connects across space with Ren as keen to draw her to the dark side as Luke is to draw her to good.

This story alternates with Leia and Finn on the rebel spaceship desperately trying to evade extermination by Snoke and Kylo Ren. It’s only when the rebels realise that if they can destroy a tracker on the Empire’s star destroyer it will enable their ability to out run them.

The Force Awakens, as  good as it was, nonetheless was still a reworking of Star Wars and this second film in the new trilogy owes much to ‘The Empire Strikes Back’ with its characters split into two factions. Luke takes the Yoda role of teacher to Rey’s role of Luke when he was a protégé himself. It not just that but also the reintroduction of beloved old moments too so we have the iconic AT -AT’s attacking the rebel base which featured at the start of Empire only here they stomp across a thinly iced planet surface that gives way to blood red powder ideally suited to its climatic showdown. ‘The Last Jedi’s’ major difference to The Empire Strikes Back is its shift from the latter’s solemn tone and downbeat ending to a far lighter script. It’s far funnier than any of the other film’s ever dared to be and its perhaps the casting of Ade Edmondson who, right from the start, hints at  the humour to come. And there are some very funny moments notably the first scene with Rey & Luke which includes a brilliantly funny throwaway laugh.

On a casting note there are bigger names than Edmondson, who does play it straight as a bay guy, with Laura Dern as a Vice Admiral in a purple rinse wig that makes her look like she’s attending an Islington fund raising dinner and also along for the ride is Benecio del Toro as a thief but inevitably is really Benecio Del Toro playing himself with a quiff and a stutter. The film brings back Chewbacca but also, inevitably, R2-D2 & C3PO albeit in minor roles seemingly because the droids agents seems to have contractually secured an agreement that they should appear in all the films even though they’re contribution here is wholly disposable but we also have brief appearances from General Ackbar & even Warwick Davis though thankfully not as an Ewok.

But most wistfully is Carrie Fisher in her last performance as Leia before she passed away and for fans who’ve watched her through the years in the iconic role will be misty eyed at some of the unknowingly prophetic lines she utters. The film does her no disservice and the re-shoots necessitated and CGI tinkering is seamless and its fitting tribute to the actress who was as tough in real life as she was in the role.

Ultimately this is a simple story as the rebels continue their fight against the Empire and it’s far more enjoyable than George Lucas’s disappointingly dull Phantom Menace and its story about intergalactic taxes. At two and a half hours it is overlong but never boring but there are some misfires – a pack of CGI crystal dogs that look like pound shop Swarovski crystal ornaments come to life are shoe horned into a scene to serve a single purpose in the story. But that a minor quibble in what is a highly enjoyable  and spectacular romp. Can’t wait for the Han Solo film next year.

Here, Rian Johnson introduced the film to us with a special guest……