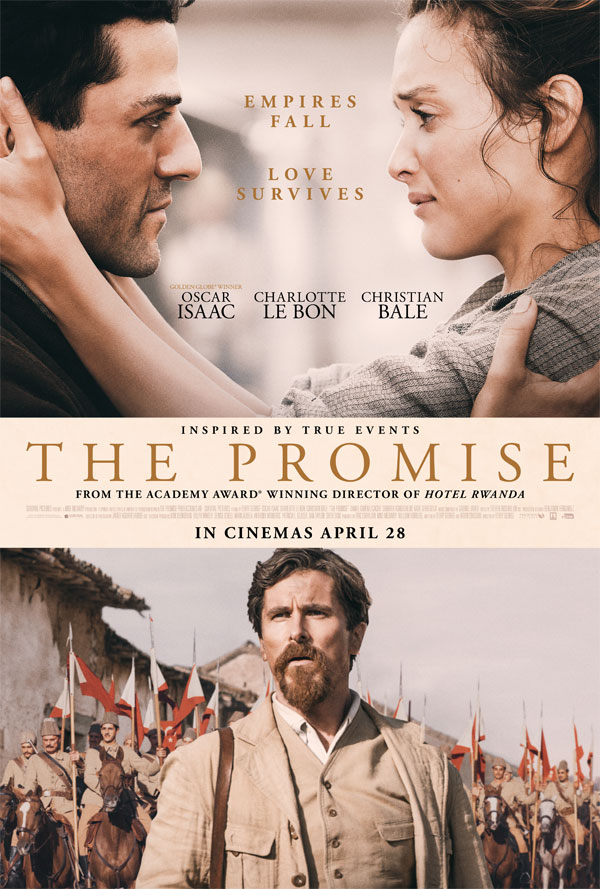 We’ve had our fair share of true story films so far this year from ‘The Founder’ being one of the best to ‘Bitter Harvest’ being…….um…….well far from being the best. ‘The Promise’ is not the first time that writer director Terry George has written about genocide having made the superb ‘Hotel Rwanda’ some years ago and here he focuses on the slaughter of the Armenian’s by Turkeys Ottoman Empire in the early part of the last century which plays as back ground to a central love triangle between Chris Myers (Christian Bale) a respected reporter, Mikal Boghosian (Oscar Isaac) an Armenian medical student and Ana (Charlotte Le Bon). Boghisiani is  betrothed to another woman in his village but when he moves to the city for his studies he meets Ana (which the cast pronounce as Ar –naaar)  they find their friendship eventually turns to romance. Though Bale suspects that something is going on he continues to  report on the Ottoman Empire’s desperately clinging onto power which they try to enforce by  exterminating the Armenian people but with Isaac’s heritage it means that his life is in constant danger (as he looks like a young Ian McShane it’s a wonder why he doesn’t just tell soldiers that his name is ‘Lovejoy’).

Today the story of genocide is little known but at the time it was all over the international press but over  the following decades it  has been suppressed and even today is denied whole scale by Turkey and  credit must be given to George for his telling of the story with scenes of slaughtered villagers  left on a river bank and the last act of the film focusses on the Armenians and their children fleeing for their lives as they scramble up a mountain whilst the Turks shell them with heavy artillery. After Saving Private Ryan and Hacksaw Ridge scenes like this can be both truly shocking and moving but here it’s just rather bland and prompts mild irritation rather than anger and outrage at the atrocity. This may well be because it’s all rather vanilla in the way its presented amongst the sun kissed landscapes or that it takes so long to get there as at well over two hours it’s a little but dull. Like ‘Bitter Harvest’ earlier this year this is undoubtedly an enthralling story rather blandly done with a not especially interesting love story and frankly the promise we’d like is that of a better film next time.