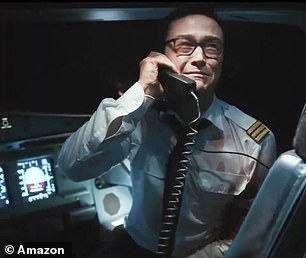 7500 becomes the latest in a long line of films that have confined itself to one setting which includes, ‘Phone Booth’ (Colin Farrell in a phone box),  ‘Devil’ (a group of people stuck in a lift) an perhaps most claustrophobic of all, ‘Buried’ (Ryan Reynolds in a coffin). The thriller 7500 follows what happens when a group of terrorists try to seize control of a Berlin-Paris flight but also how a mild-mannered young American pilot Tobias (Joseph Gordon-Levitt) struggles to save the lives of the passengers and crew. Not your usual big action macho man piece but instead 7500 restricts all the action to one part of the plane but just how was it shot only in a tiny cockpit? With the exception of the opening sequence, a series of shots from the perspective of airport terminal surveillance cameras, 7500 takes place entirely in the tiny cockpit of an Airbus A320 airliner. ‘It’s fascinating to see how you can tell a whole story without moving from a confined space,” observes Gordon-Levitt. “In more conventional movie making a lot of the storytelling comes from the different locations you shoot in. And so to take away that variable was another really interesting creative challenge I hadn’t been a part of before. But it’s also a powerful metaphor.” To Gordon-Levitt, the locked door that separates the hijackers from the pilots can be seen as a symbol for the way a subset of Western society, including immigrants, are kept out of the driver’s seat — and the way frustration about that can sometimes erupt in violence. “They’re not in control of their own lives or where they’re going and they’re trying to fight for that control.” Director Patrick Vollrath also notes that for most of the film, Tobias can only see the hijackers as blurry figures on a grainy black-and-white camera monitor. “It’s similar to the images we all know from the media when it comes to terrorism — videos from surveillance cameras or poor-quality propaganda recordings that don’t reveal the bigger picture.” Once the physical door dividing them is opened, however, and Tobias and Vedat the youngest of the terrorists come face to face and form an unexpected bond. “That’s really the crux of the movie to me,” says Gordon-Levitt. “That once you put two human beings in a room together, and they are no longer relating to each other as labels, as stereotypes, they have to relate to each other just as people and find what they have in common.”

Vollrath’s commitment to authenticity led to the production purchasing an actual airliner to film in. “We had to buy a real airplane because none of Europe’s mock-up planes could convince Patrick,” says producer Leo. “Not one of them looked exactly like a real A320 or a Boeing. Instead they all looked like combinations of the two. So, we bought a real one, cut it and used the front third of the plane. In the end, it was worth it because it feels more realistic than anything I have ever seen on screen.” Of the two major aircraft makers, Vollrath wanted an Airbus because the way the flight controls are configured matched certain key elements of his screenplay. Finding one for sale turned out to be a challenge, however. “Through a connection here and a connection there we found a company that buys and rebuilds airplanes for training flight attendants and airport security,” he says. “There we found a decommissioned Airbus A320 which was exactly what I wanted.” 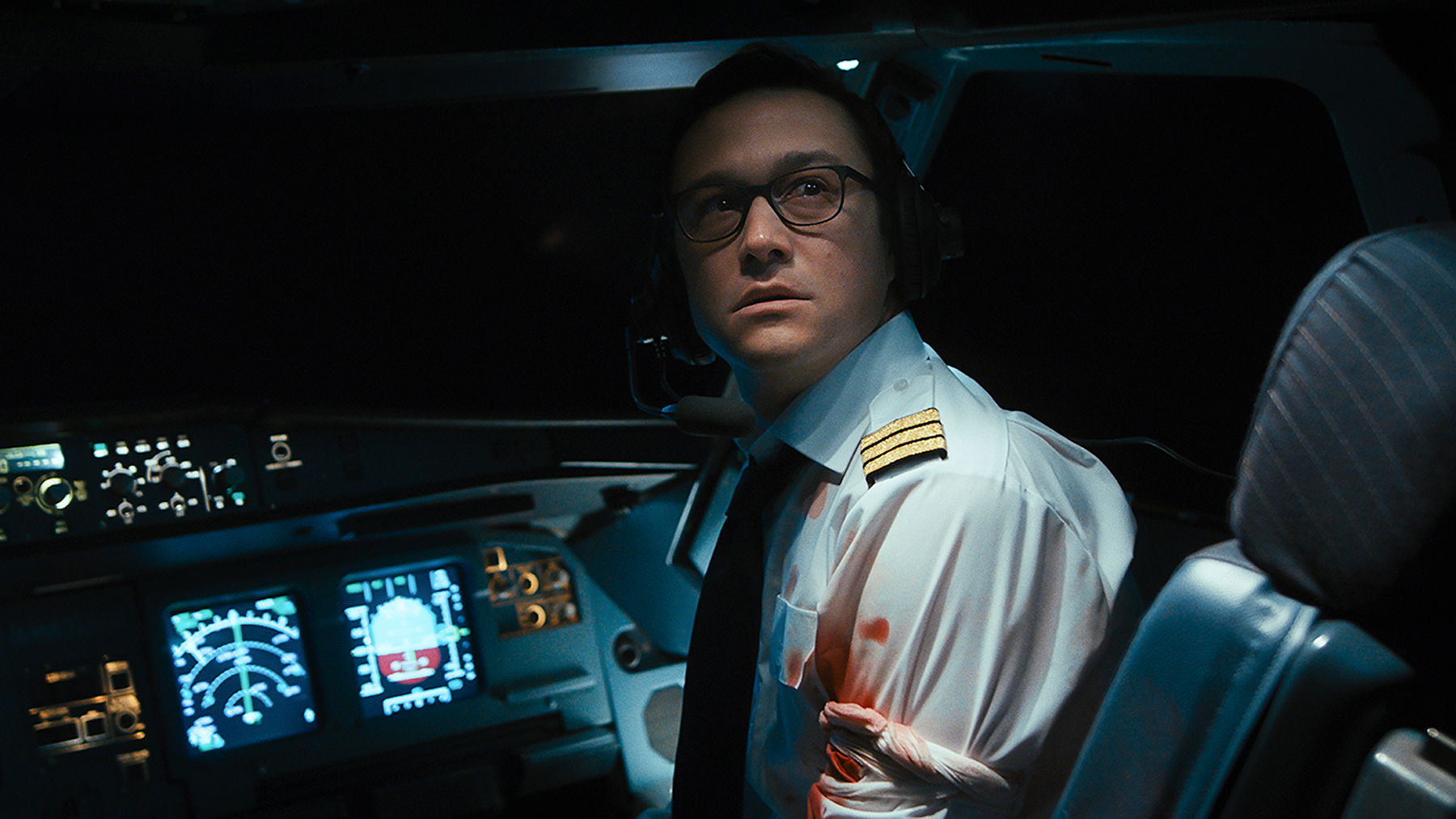 The segment of the aircraft used for filming included the front galley (food-prep area) and the first eight rows of seats, but it had no flight instruments, so the art department had to buy or rebuild those. “It turns out there is this huge community of geeks who are into flight simulators and build airplane instrument panels in their basements,” says the director. “So it was a matter of getting in touch with people who referred us to other people who could sell us what we needed.” After that, the task of making the intricate controls look accurate fell to production designer Thorsten Sabel and his team. “Some things, like the door-lock button, which is really hard to get, they had to build from scratch,” says Vollrath. “There’s a good page on the Airbus website where you have a 360-degree view inside a cockpit and you can zoom in. I always had that on my phone and I’d be like, ‘It has to look like this.’” 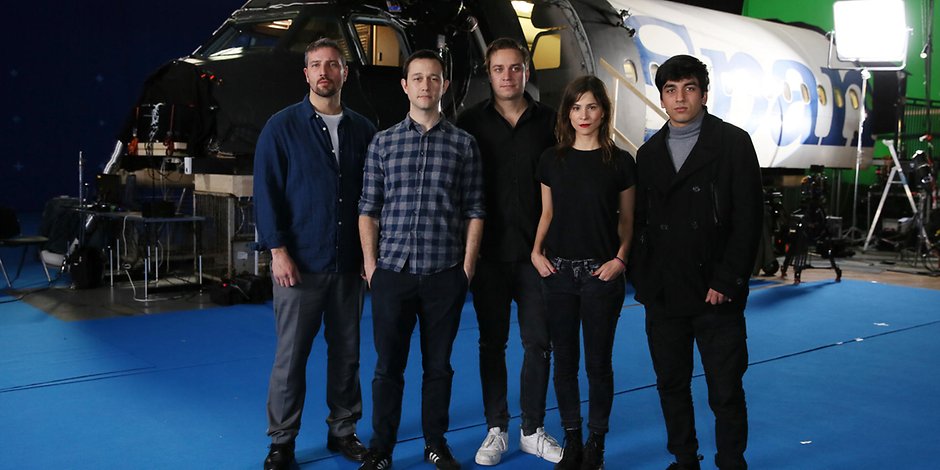 The airplane segment was moved to a studio in Cologne where it was positioned about 12 feet above the ground on a pneumatic rig that allowed it to be shaken by hand to simulate the plane’s vibrations as it encounters turbulence or makes steep ascents or descents. “Someone was literally standing next to it and shaking it,” says Vollrath. “We weren’t depending on anything electrical.” Almost the entire film was shot in the studio, using front projection and blue screen for whatever takes place outside the plane’s windshield. The only exception was the film’s final scenes, for which the cockpit was moved to an actual airfield and the outside action was filmed live. 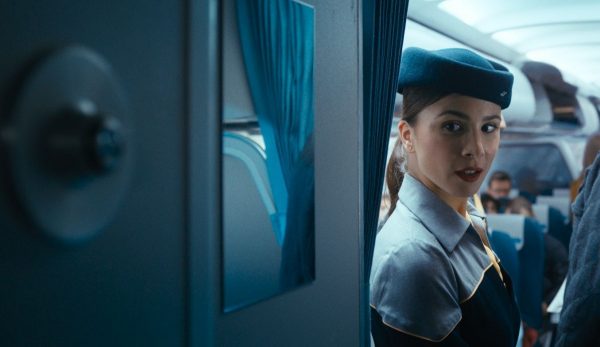 As part of his extensive research prior to the shoot, cinematographer Sebastian Thaler spent time filming in the cockpit of an actual commercial airline flight, capturing footage that would serve as a visual reference for all of the departments on set. “We took a small camera with us and documented all the work in progress by the pilots as well as the lighting conditions,” he recounts. “That became sort of a mood board for everybody — for the art department, for us, for the lighting folks. And we tried to reproduce this documentary feeling we had in the real flight cockpit with our studio cockpit.” The confined set, along with the improvisational nature of the acting, posed numerous challenges for Thaler. “There was no real written dialogue, except for the technical stuff,” he says. “Everything else was improvised by the actors with Patrick’s guidance. And the movement was also free, so I didn’t know if or when they were going to stand up or sit down or what they were going to do. So that was all happening live in front of me without any rehearsal.”

In order to respond instantaneously to the improvised action, all of the camerawork was handheld. And because of the limited space, Thaler was the only crew member positioned inside the cockpit. Lights were placed throughout the cockpit and turned on and off by a lighting operator on the fly to avoid the cameraman casting any unwanted shadows. Focus pulling was also handled remotely via a video monitor. The sound team strategically positioned mics so they could capture the dialogue wherever the actors moved. The film was shot digitally to allow the extended takes to play out without the need to stop and change film canisters. Thaler chose the ultralight Alexa Mini to give him maximum maneuverability. “There was only one spot in the back of the cockpit where I could stand so I had to have the camera in front of me the whole time rather than on my shoulder,” he explains. “I needed the smallest possible camera.” The filmmakers initially considered shooting in a 1.85:1 aspect ratio but eventually decided on 2.35:1. “We talked about using the more vertical frame to convey the claustrophobia of the setting, but after some test shooting we found there was too much information at the top and bottom of the image,” says Thaler. “You saw too much of the cockpit, which was distracting from the actors.” Lenses typically ranged from 18mm to 35mm focal lengths, with occasional wider-angle shots.

During filming, Vollrath provided direction to his cinematographer through an earpiece. “I was choosing what was important to show the audience at each moment,” says Thaler. “Sometimes Patrick would tell me what he wanted to see or something he wanted to try out. But sometimes I ignored him. We’ve known each other so long that I know he trusts me and I trust him.” After each take, director and cinematographer would huddle in the video village to analyze the footage and discuss any changes for the next take, says Thaler. “Maybe we wanted to use a closer lens to have more possibilities for editing. Or maybe we would decide to concentrate more on this part or more on that part of the scene’.