It’s difficult to believe that William Peter Blatty, the man who wrote both the book and screenplay of The Exorcist had started off in Hollywood as a highly respected comedy scriptwriter having collaborated with Blake Edwards on several comedy films.

He was born in 1928 to Lebanese parents who had emigrated to the US where at the age of three his father left the family.  He was raised by his devoutly Catholic mother and the church was extremely important to him throughout his life. Alone with just his mother they led a precarious existence with them changing addresses almost 30 times. He we educated at Jesuit run schools on scholarships and he graduated with a Masters in English literature.

The degree didn’t get him any meaningful employment as he moved from job to job including a truck driver, an airline ticket agent, and a door to door vacuum cleaner salesman before he finally enlisted in the US Air Force before joining the US Information Agency as an Editor in Beirut of all places before finally deciding to focus on a career as a writer in the late 1950’s.

His first book was ‘Which way to Mecca?’ but in 1961 he appeared on the TV quiz ‘You Bet Your Life’, a hugely popular quiz hosted by Groucho Marx where he and another contestant won $10,000. An immense sum of money in the day and it meant that he could focus full time on writing. He went on to write several comic books in the mid sixties and many book critics recognised his talent for funny  lines. He was also writing screenplays with Hollywood director Blake Edwards and their films included the second Pink Panther film, ‘A Shot in the Dark’ as well as ‘What did you do to win the war Daddy?’,’ Darling Lili’ and 1967’s ‘Gunn’ based on the Peter Gunn TV series.

By now he had started work on the novel that was to change his career and certainly would end his days as a comedy writer forever.

Quite what bought about such a change in genre is open to debate. Blatty has gone on record as saying that he wanted to try something different. But he’s also said that there was no longer a market for comedy. It’s also been suggested that his mother’s death in 1967 bought about a renewed spiritual yearning and renewal in his Catholic faith or that it bought about some soul searching wanting to account for the presence of Evil. Truth is that probably all of these had some influence on his decision to write the novel.

The Exorcist first appeared as a novel in 1971and received outstanding reviews though his publisher thought it would be a failure. But then the film was made. It changed the face of horror. The film of the book wowed audiences and stories of fainting, vomiting, seizures and people running from the  cinemas in fear were rife and its box office exploded becoming and remaining the biggest box office horror film ever. For the studios it also made horror viable at the box office and the film earned a slew of nominations and won 2 Oscars one of which was for Blatty himself as screenwriter.

Inevitably his publishers as well as the studio wanted a sequel. He declined instead choosing to write a memoir about his mother but few were interested and he found very quickly that all anyone was interested from him was horror.

His renewed commitment to his Catholic faith bought about ‘The Ninth Configuration’ a film  based on his book ‘Twinkle Twinkle Killer Kane’ and was a meditation on faith and God’s existence and was hugely surreal yet was also nominated for awards winning Blatty a Golden Globe for its script.

As far as Hollywood was concerned The Exorcist was indelibly stamped against his name and in 1983 he wrote a sequel. The book was called ‘Legion’ and completely ignored the utterly disastrous John Boorman directed ‘The Exorcist 2: The Heretic’  which had starred Richard Burton and had been generally laughed out of cinemas and derided by all who had the misfortune to see it. Legion, the book, was to become The Exorcist 3 which was released in 1990. It was not without its problems. Blatty had directed it but the studio were insistent on a film with Exorcist in the title have an exorcism and the end of the film was totally and begrudgingly reshot y Blatty with a hyperactive demonic climax. It was not the film Blatty had intended and he was keen to put together his directors cut of the film which was how he had really envisioned the film to be released. There were constant rumours that this version was being prepared but as yet nothing has come to fruition.

After this Blatty became reconciled with the knowledge that he was forever going to be remembered as the man behind The Exorcist which cast a shadow so huge that he would never escape .   ‘The sad truth is that nobody wants me to write comedy’ he admitted in an interview, ‘The Exorcist not only ended that career, it expunged all memory of its existence.’

People’s reaction to The Exorcist continued to concern him as many saw the films ending where a priest jumps to his death as a triumph for the devil and he made his concerns known to the film’s director and close friend William Friedkin. The director came round to his point of view and in 2000 a director’s cut was released making it clear that Good beats Evil. Blatty even went so far as to rewrite parts of the original book and added an extra chapter to the book in 2011’s 40th Anniversary Edition.

He continued writing almost to the end and his faith became more important to him than ever even going as far as to sue his university in Georgetown alleging that it was no longer adhering to its founding Catholicism and filing a petition with the Vatican who acknowledged that it was a well founded complaint’.

Blatty was unfailing polite to fans of the book and our own Deputy Editor, Simon, was in regular contact with him about The Exorcist 3 but the writer was undecided as to whether to speak about the film. One moment he was keen to speak about it, the next vehemently against it  before finally emailing Simon a melancholy,’ I have decided to live out whatever time I’ve got left without ever again doing an interview.

Blatty had seven children and was married four times with the last being  in 1983 and tragically one of his sons died in2006 for which the author wrote his last book in 2015.

At 89 years old he passed away in hospital from multiple myeloma. 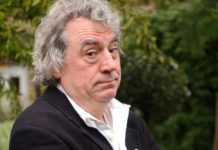