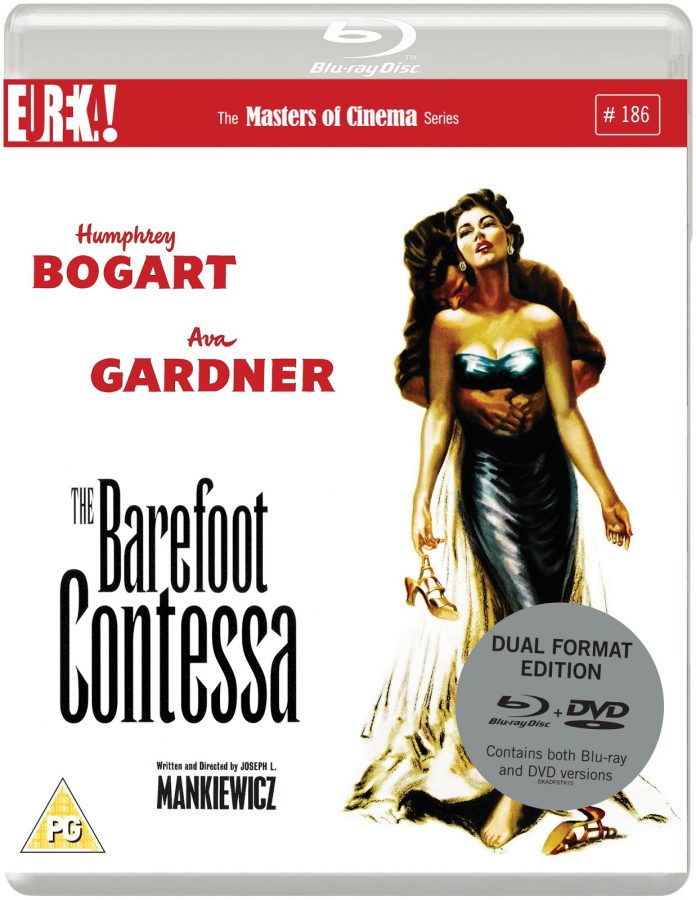 By 1954 Humphrey Bogart was a Hollywood star and legend having already appeared in Angels with Dirty Faces, The Maltese Falcon, Casablanca, The Big Sleep,Treasure of the Sierra Madre, Key Largo and The African Queen. All bona fide classics but by 1954 unknown to him he was entering the last few  years of both his life and career but was to star in The Barefoot Contessa.

It was a different story for writer director Joseph L Mankiewicz. Having written dozens of scripts with two or three being made a year he would turn to directing where he made, amongst others, All About Eve,  before writing & directing 1954’s The Barefoot Contessa by which time he’d already won consecutive Oscars for directing.

A high point in the already success-laden career of writer-director Joseph L. Mankiewicz  and one of the most glamorous and extravagant films from Hollywood’s Golden Age, The Barefoot Contessa is a tragic drama about the tumultuous rise and fall of fictional Hollywood actress Maria Vargas (Ava Gardner).

Humphrey Bogart plays down on his luck writer and director Harry Dawes, reduced to working for an egotistical and abusive producer, Kirk Edwards (Warren Stevens).  Whilst scouting for the female lead in his new movie, Dawes meets the beautiful and charismatic Maria Vargas, a barefooted flamenco dancer, in a Madrid night club and convinces her to star in his movie. Maria is an overnight sensation, but cannot find satisfaction in the shallow world of Hollywood, and the men in her life who treat her as nothing more than a commodity.

Influenced by the narrative structure and theme of Billy Wilder’s magnificent and slightly better ‘Sunset Boulevard’ Makiewicz’s The Barefoot Contessa is not without its own highlights. As a satire it was spot with its depiction of how fickle was (and still is) as so ably demonstrated by Edmond O’Brien’s Oscar winning turn as a duplicitous publicist. The film was also to benefit from one of the best cinematographers to grace Hollywood namely Jack Cardiff whose films included Black Narcissus, Hitchcock’s Under Capricorn, The African Queen, and in later years…..um….Rambo.

The disc is a bit of a must  for fans of the Golden age of Hollywood and though a little too long was a huge success in its day with a commentary by two film historians that veers between at times a little dry and sometimes a little over analytical  but nonetheless less still interesting.

The extras on the disc include:

Mankiewicz was at the peak of his powers and after this would go on to make ‘Guys and Dolls’ the following year before making the catastrophic ‘Cleopatra’ in 1963. The Barefoot Contessa though is a reminder of a era in Hollywood which was already beginning to change and Mankiewicz  script was already predicting the fickle nature of the industry in which he had made his name and there are elements of the script which are as relevant today as they were then.