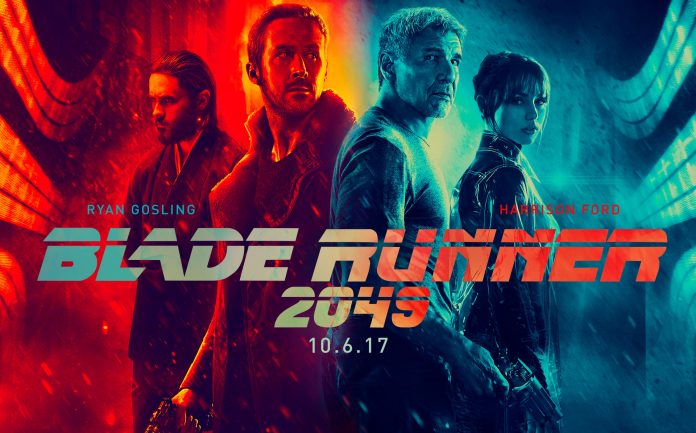 Long delayed with much secrecy around its production the highly anticipated sequel to Ridley Scott’s Blade Runner is finally here. Scott’s original was a troubled production with the director taking it from all sides with the crew rebelling against him at one point and an arduous shoot which began to overrun and the financiers almost throwing him off the film. What he turned in is now regarded as one of the all time most influential science fiction films ever made so director Denis Villeneuve had a lot to live up to. Thankfully the French Canadian director has produced two of the best film of the last two years with Sicario and the Oscar nominated sci fi film, Arrival .

The secrecy of the film has extended to the reviews too as the press have been directly requested by the director himself not to reveal much about the film as he understandably wants the audience to see the sequel and let its secrets unfold before them. It’s not an unfair request and its spoiling nothing to say that Ryan Gosling plays ‘K’, a blade runner (someone who shuts down life like replicants who have been created to serve humans). He’s been specifically tasked to ‘retire’ the older model of replicant who had an unlimited lifespan and it’s in the opening sequence which is partly inspired by what would have been the original opening of Ridley Scott’s version if they’d had the money. It’s here that he comes across a secret that, once he brings it to the attention of his bosses, sets the plot in motion. It’s something that his organisation don’t want coming to light and it prompts him to  locate an old Blade Runner (Harrison Ford) who went into hiding as seen at the end of the original film and has not been seen for thirty years.

Harrison Ford was critical of the first film telling screenwriter Hampton Fancher, who returns to write the sequel, that for a detective he did very little detecting. That’s been rectified (as well as losing the voiceover narrative) here as Ryan Gosling has plenty to dig into and this is far more of a film noir all stunningly shot by Roger Deakins who after 13 Oscar nominations for cinematography must surely win it for this. One of the elements that made the original so distinctive was Vangelis music and although he does not score the film again the spirit of his music, all booming synths and soaring riffs, is channeled by Benjamin Wallfisch and Hans Zimmer fresh off his tremendous score for Dunkirk and he too must be a shoo-in for an Oscar come 2018.

With its dystopian landscapes bared to the elements this is wholly in keeping with Scott’s version and the script has respectful nods to it predecessor as well as further exploring  what it is to be human. What Villeneuve has shot will not disappoint with practical sets blending seamlessly with CGI and is both thought provoking, enthralling and ultimately will please fans in one of the year’s best films.