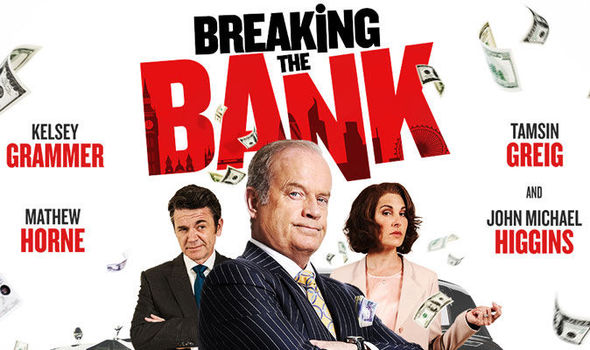 The world of finance is hardly the most riveting with ticker tape screens and brash young men in red braces and gaudy shirts shouting down phones it makes little sense to anyone except their fellow bankers. Some films have bucked the trend such as ‘Wall Street’ catching the 1980’s zeitgeist with Michael Douglas star turn or ‘The Wolf of Wall Street’ which  had Scorsese’s bravura direction or the recent Oscar winning ‘The Big Short’ with its sparkling script. Unfortunately  one film that will  not be joining this  mighty pantheon is the British based  ,’Breaking the Bank’ which plays like its poorer cousin. We say poorer, we mean utterly destitute.

The subject matter does require a certain level of credibility when it comes to high finance and Kelsey Grammar as Sir Charles Bunbury , the CEO of a 200 year old British bank, a character that is so wholly inept  that it removes any credibility from the start. Unsurprisingly then he loses the company to circling US & Japans investment banks. When his ferocious wife, played by a splendidly waspish Tamsin Greig in the films only decent role, kicks him out of their house after he’s lost the bank and a ton of her pension money in a bad investment he finds himself living amongst the homeless and befriends another homeless male who turns out to be something of a financial whizz. Together they thwart the avaricious and grasping employee played by Mathew Horne, who has connived   his way up to a senior management position. Horne is another decent comic actor who is punching below his weight here and still seems to be suffering from the fallout of his disastrous sketch show with James Corden who himself seems to have rehabilitated himself well enough to get his own US chat show at present. He’s not the only actor who does himself no favours in this either because Andrew Sachs, who for many people will forever be Fawlty Towers’ Manuel,  plays an elderly chauffeur and with no lines he just stands there reacting to what is going on around him. Doon Mackichan, another great unsung female comic actress, has a sole scene as a part time phone line dominatrix  which never fully mines its comic potential. Kelsey Grammar has proved himself time after time that he is an excellent comic actor with ‘Cheers’ & ‘Frasier’ and his voiceover in Toy Story 2 & 3 and as sideshow Bob in The Simpsons.  This however is very much a professional nadir and while it’s often complained that some actors phone in their performance here he seems to have been on holiday in the UK and had some spare time to make this which probably paid for the holiday in the first place.

It’s a big ask to have sympathy for bankers these days having shown themselves to be either corrupt or completely unethical and this is one of those films that wants to eat it’s cake and have it by presenting some bankers as utterly loathsome and despicable whilst at the same time trying to draw sympathy for a lead character, also a banker, who’s incredibly dim yet in charge of hundreds of millions of pounds which he squanders through ineptitude. Flatly lit and playing like a TV film of the week with stereotypical characters it’s a wonder as to how this has got a theatrical release as its real market is direct to dvd.

When it comes to competing US & UK films about finance the old show tune, ‘anything you can do, I can do better’ springs to mind but for this film but just substitute ‘better’ for ‘worse’.