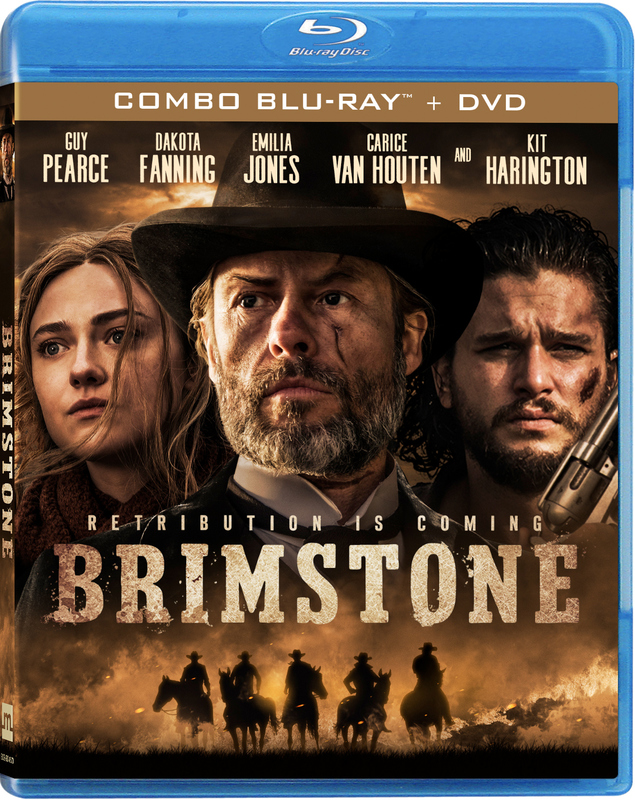 The western is a singularly American genre yet some of the classics have been shot outside the good ol’ US of A. Probably most notable amongst them is Sergio Leoni’s spaghetti western’s which, though financed by Italy, were mostly shot in Spain. Well we can now add to that list of epic westerns, ‘Brimstone’, a Dutch western. Yes a Dutch western made by one of that country’s top directors, Martin Koolhoven.

In his home country Koolhoven is an award winning director but Brimstone was a pet project that took him seven years to get to the screen with filming almost ended before it had started. With the crew ready and sets built the original lead actress Mia Wasikowska decided to pull out shortly followed by Robert Pattinson who was replaced by Kit Harington. It’s difficult to imagine either of them in the film now. Dakota Fanning stepped in to appear opposite Guy Pearce who is truly terrifying in his role as The Reverend, dead eyed, demonic and possibly the most twisted role Pearce has ever played. It’s a role that’s heavily influenced by Robert Mitchum in ‘Night of the Hunter’ yet ramped up even further.

Brimstone is a tale of retribution set in the American west at the end of the 19th century and Dakota Fanning plays Liz a young mute woman whose life changes dramatically when Pearce’s  Reverend comes to town. Forced to go on the run what follows is a game of cat and mouse that draws you in.

Koolhoven’s original draft had the story running in a linear narrative with flashbacks but as the flashbacks became ever bigger the director rejigged the whole script so that it’s broken into four definitive chapters all played as a flashback. It’s an intriguing premise which, rather than being flashy for the sake of it, draws the audience into increasingly horrifying chapters. And Brimstone certainly has some scenes that you wouldn’t be settling down with the family to watch. Brutal & bloody, graphic and shocking but nonetheless  engrossing even though there are moments when you might want to turn away.

Pearce is horrifying but Dakota Fanning even though she is mute, and in the flash back we find out why, holds her own against his towering performance. Equally good is Emilia Jones, who despite being in her early teens when she made the film, gives an extraordinary performance as Dakota’s daughter in some extremely grim scenes which must have been as traumatic to film as they are to watch.

Epic in scope but unflinching in detail with its scenes of violence, incest, misogyny and underage sex this is startlingly original and its transfer to dvd and Blu ray is especially good with rich colours and the blackest of black hues which is ideally suited to the films grim subject matter.

Unfortunately the disc lacks what would have been an insightful directors commentary but interviews with cast and crew reveal some interesting history to the film. The deleted and extended scenes merely show why it was right to edit them from the film or cut down the length of some and there’s also the obligatory trailer. If only the extras had been as good as the film but this is a film well worth seeing if you’ve the stomach for it.

BRIMSTONE IS RELEASED ON 19th FEBRUARY 2018