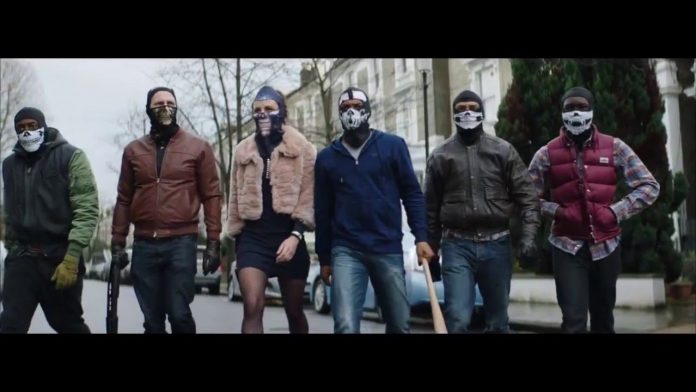 One man film industry Noel Clarke, started off as an actor in the mid-nineties before writing his first feature film, ‘Kidulthood’ in 2006 which he also starred in before finally moving up to directing its sequel  ‘Adulthood’ in 2008 and the films were enough of a success making enough money between them to warrant a third and final film in what was an unintended trilogy.

And so we have ‘Brotherhood’ which follows Clarke’s character Sam Peel, now married with two young children and keen to put behind him the troubles and enemies he’s made in the earlier films. That’s highly unlikely as the film starts with the shooting of his brother performing at a nightclub and it quickly becomes apparent this all part of some mob master plan to provoke Sam into coming out of his safe suburban life by a gangland boss (Jason Maza) with an ulterior motive as figures from Sam’s past are still out for revenge.

If anything over the past 15 years Clarke has proved himself to be an extremely focussed and prolific writer /director keen to work in different genres having dabbled with horror (‘Storage 24’), sport (‘Fast Girls’), action (‘The Anomaly’) but urban crime thrillers seem to hold a fascination for him and ‘Brotherhood’ has something of the aspiration of the machinations of the complex plotting of the best mafia films and like ‘The Godfather 3’ just when Sam thinks he’s out from it all they drag him back in.

Clark is undeniably good in the role and has written some very good characters here and shows a flair for some hilarious comic moments many of which are played superbly by Arnold Oceng as Henry, a friend of the shot brother, who reluctantly comes to his aid despite the obvious consequences whilst trying not to let his wife know what he’s up to. At the same time it’s this comedic  element that undermines Jason Maza as the crime lord, Daley, which makes him less than convincing than if he were a sidekick, in fact at times he comes over a bit like Jay in ‘The Inbetweeners’ gone bad.   Because it’s these sidekicks who do convince with an array of hoodie wearing chavs and wannabe hardmen who are little more than silly little boys playing at being tough only to realise that it’s a life style they’re not equipped to cope with and invariably has fatal consequences.

Clarke has gathered a good cast with stand out turns by Leeshon Alexander as the knife wielding Hugz, a villain who is frighteningly convincing and Cornel John as a scarily psychotic yardie style villain whose performance starts well before it becomes two dimensional. It’s unfortunate too that there are few decent roles here with women either being homely mother figures or whores and there are no end of scenes with full frontal female nudity.

Clarke has once again written the script with an ear for street language but his plotting has too many contrived moments and  coincidences to drive the narrative with moments that aren’t always credible  –where for instance, despite almost having been stabbed Sam breaks into the mob bosses home knowing the whole gang are present, there’s an almost 70’s era Bond villain piece of exposition by Daley, and despite claiming to be a family man committed to his wife and children he allows himself to be picked up by a woman on the street, and a villain has a road to Damascus moment to turn his life around  and there’s also a lack of knowledge of police procedures – the downfall of so many films – that are overlooked to allow  the plot to progress which in this case allows Sam to regress to being some sort of avenging angel.

Clarke strength is in his knowledge of street life and his scripts would  benefit greatly if he would allow himself to co write with another with a grasp of these structural moments because one day he will make a truly great film.

As a director Clarke keeps things moving and as an actor he is good in the lead role which he has now played three times. The previous two entries in the franchise had more of an appeal to a black audience demographic but this if far more accessible to everyone but for his fans, and there are many, this is Noel Clarke’s best film yet.

You can see him introduce the film to the the cast and critics here on our YouTube channel (remember to subscribe):https://www.youtube.com/watch?v=nXuT415JTzo