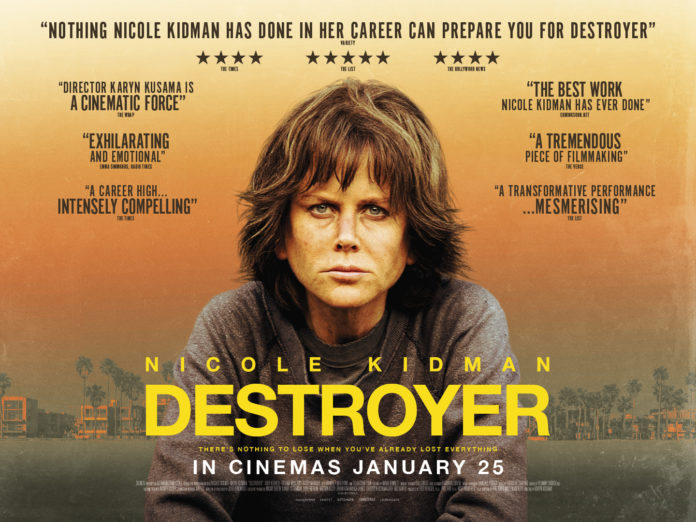 Who doesn’t love a ‘before and after’ photo? There’s been the infamous photos of a beautiful woman whose features were ravaged by crystal meth usage or maybe the actress who is transformed by a skilled makeup artist. Take Amanda Holden for instance who before has the appearance of  being dead eyed and plate faced with the emotional range of an empty Tupperware  box until she emerges from the make up room looking like a dead eyed , plate faced……OK maybe that’s a bad example. However Nicole Kidman’s appearance in Destroyer is a case in point.

As Erin Bell (Nicole Kidman) she was a young undercover cop partnered with her lover infiltrating a gang for bank robbers. It’s only later in the film that we see Bell in this guise, an attractive, capable and loved up woman but our first sight of her is years later asleep in a car her face now gaunt and ghostlike, her hair dead and her  frame painfully thin. Whatever has caused this has had a devastating effect and its only too clear as, almost skeletally thin, she teeters across to a crime scene where a man has been shot in the head and dumped in a city as burnt out as she is.

It’s a case she takes on albeit on her own whilst at the same time she battles to keep her estranged daughter on the straight and narrow as her ex-husband seems woefully incapable. It’s a balance that she’s not always in control, still devastated by the undercover job that she was part of and the dead man is the key to taking back charge of her life which has seemingly spiralled out of control. It’s affected her judgement s a cop too as seen in a sequence where she comes across a bank robbery about to take place but rather than waiting for enough back up she carries on trying to deal with it assisted only by other police unit with the expected fall out. Despite her jaded view she’s still committed to the work but is not as good a cop as she could be taking unnecessary risks where she ends up getting battered and bruised with little concern for her own safety or worse people end up dying around her. It’s been a mark of her service that this happens so it’s a surprise that no one is partnered with her to rein her in or perhaps just nobody wants to work with her. Maybe the destroyer is herself.

Directed by Karyn Kusama whose previous films have included Aeon Flux and Jennifer’s Body and like them this is another female led film and Kidman is phenomenal in the role barely recognisable. The script flash backs to the undercover story and bit by bit it builds to a melancholy even heart breaking end.  Kidman has already been nominated for a Golden Globe and rightly so and this is an early contender for our best films of 2019 list.