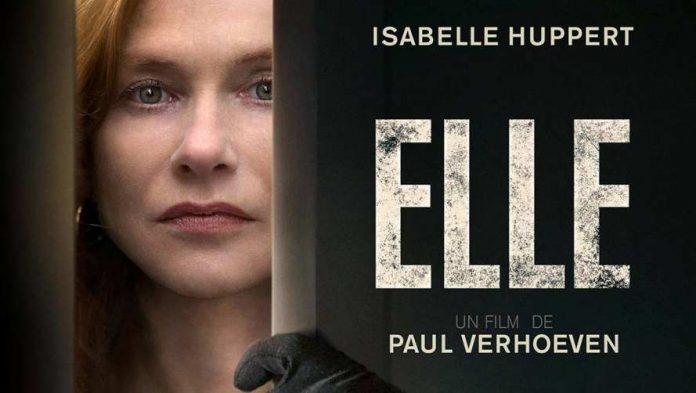 We recently had a go at re-enacting famous film scenes in our office the other day so whilst one of us wore a leather jacket and shades for a terminator scene another dressed up as a nun twirling around and caterwauling away to The Sound of Music. Unfortunately our Editor decided to re-enact Sharon Stone’s leg crossing scene in Basic Instinct which frankly was like watching a featherless turkey trying to escape from a cement mixer. With most of the writers suffering from post stress traumatic  disorder there was a certain degree of trepidation going to see the film ‘Elle’ which is directed by enfant terrible Paul Verhoeven who had also made Basic Instinct.  Having left Hollywood in 2000 to return to Europe the Dutch director has made a French language film and it’s no less controversial than his other films Show girls, Robocop & Starship Troopers as right from the start a cat sits watching Michele LeBlanc (Isabelle Huppert) being raped in her home by a black clad ski mask wearing man. It’s a distressing enough scene and Verhoeven returns to it several times later in the film.  What knocks you further off balance is her reaction after its finished where in a very matter of fact way she goes about clearing up the mess  and has a bath seemingly unfazed by what has happened and just gets on with her life. It’s seems oddly appropriate that her daytime job as the CEO of a computer game design company are currently making a rather unsavoury game involving a female heroine getting molested by monsters. From hereonin we’re introduced to several possible suspects , a young designer with a grudge against her, the husband of her business partner she is having an affair with, a neighbour she fantasises over, her elderly mother’s boy friend, her own ex husband  and all with their own back stories. She’s not the only one to have endured humiliation as  her son also is also being harangued by his pregnant harridan of a girlfriend who equally despises Michele.

It’s only later into the film that we find out why Michele has not reported this to the police which is directly related to her imprisoned father who she is estranged from and it’s not what you think it might be.  It’s her elderly and promiscuous mother who constantly urges her to get in touch with him but the key to all of this is a shocking incident in her childhood.

At 78 years old Verhoeven has lost none of his the skills which made his American films such a success and here the film shocks, amuses and horrifies but is always compelling and it’s a film which he presumably could never get made if he had stayed in the US.  In places this is sexually brazen and for the 64 year old Huppert it’s a brave role to have taken on and she is mesmerising in it and unlike her US counterparts has refused to let age intimidate her for some sexually explicit scenes. At over two hours this whizzes along with enough subplots and stories to keep you engrossed although at times it does make very uncomfortable viewing but as one charter rightly says, ‘It’s twisted’ and here that’s a good thing.