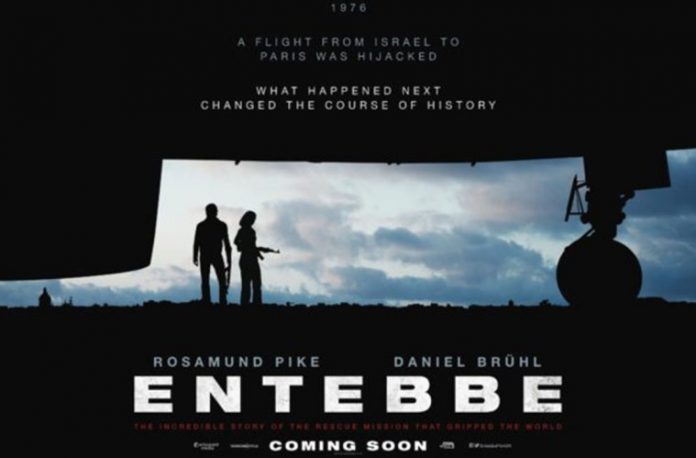 In a time when even getting a thimbleful full of sherry past airport customs results in a full body cavity search it seems almost inconceivable that in 1976 several German terrorists walked through with handguns and grenades taking a plane full of mostly Jewish passengers hostage.  Fuelled with muddle headed idealism the plane was flown to Entebbe airport in Uganda which at the time was run by the lunatic despot Idi Amin, a self appointed leader believing himself to have a direct line to God rather than a direct line to mental health experts. Frankly he would not have been out of place as a character in Kayvan Novak’s TV series ‘Fonejacker.

The story was an international outrage with Israel held to ransom by the German hijackers to release terrorists they held in prisons in return for the release of the Jewish hostages on the plane. It’s an irony not lost on lead terrorist Wilfred Bose (played by the always good Daniel Bruhl) about the Jewish nation being oppressed by Germans.  Bose quickly finds that his best laid plans go quickly awry almost as soon as they land in Entebbe finding that Idi Amin veers between benevolent host of the terrorists but equally prone to flattery from the Israeli government in an attempt to furnish their rescue plan. It’s Bose who finds himself trapped on all sides finding that the Palestinians who’ve put them up to it are only too keen to separate the Jews from the others and that his swivel eyed fanatic terrorist pal played with a single mined determination by Rosamund Pike is only too keen to shoot all their hostages in the name of their cause.

With all eyes on the Israeli Prime Minister Yitzhak Rabin who is keen to show the world that they don’t negotiate with terrorists but actually all too ready to capitulate and let them have their way. ‘Cometh the hour,  Cometh the man’ which may well be the motto of porn producers but here its Defence Secretary Shimon Peres played with resolute determination by Eddie Marsan (The Limehouse Golem) who hatches a plot with his military to train an elite troop to effect a highly risky rescue. It’s Peres who sees how impotent Rabin becomes by the moment in making the right decision and becomes the architect of the Entebbe rescue in turn knowing its success will bolster his reputation. 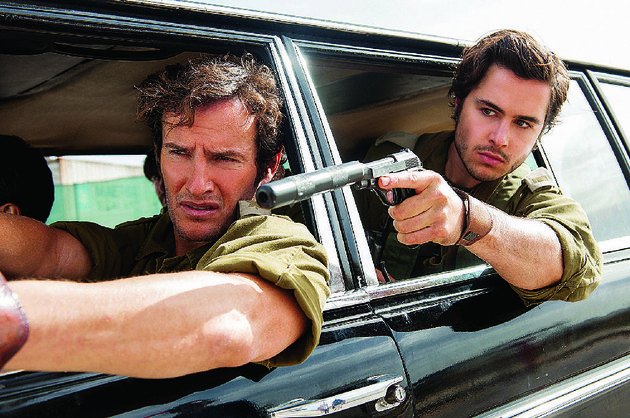 So what we have is a thrilling high adrenalin edge of your seat thriller, right? Almost.  From the very start there’s something a little off kilter when the film opens with a song and dance number with one of the dancers incapable of executing one of the moves and constantly falling off a chair. She turns out to be the girlfriend of one of the soldiers involved in the rescue attempt but for no fathomable reason the film frequently returns to this song and dance number. It fatally undermines any tension in disastrous fashion at the climax of the film as the rescue attempt in Entebbe proceeds with the film cutting back and forth between the troop and the choreographed dance. It’s almost as though the director Jose Padilha was offered the job to direct a true life thriller when he really wanted to make a musical and come what may whatever he was hired to make he was determined to get a dance number in there somewhere.

It’s a pity because, though the story has been filmed several times before, both Pike & Bruhl are good and the political shenanigans are intriguing but it’s quite jarring when this song and dance number keeps elbowing its way into the film. It’s a shame as more information about what went on has come to light since then and this would have been more insightful than previous versions. There’s nothing wrong with the narrative here but it’s a lost opportunity especially as the credits run alongside some avant garde dance leaving you more curious as to why this is in the film rather than pondering over how the Entebbe hijacking could ever happen.