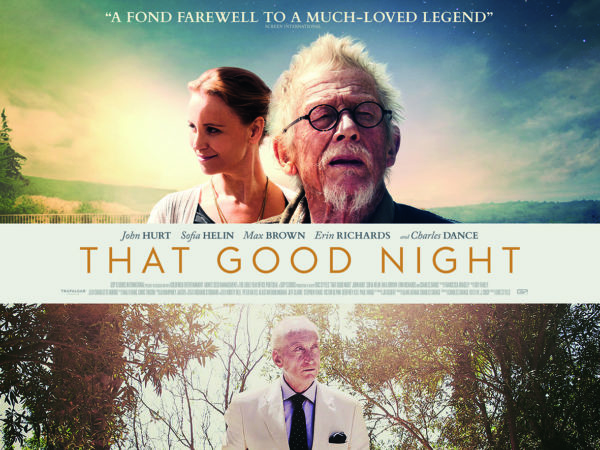 Based on a stage play Hurt plays Ralph a once great screenwriter now living in Spain but unbeknown to his wife, terminally ill. He’s already started work on what will be his last book but wants to reconcile with his son, Michael.  Crotchety, bad tempered and at times downright rude he summons Michael to his villa where he intends to break the news.  It’s to Ralph’s dismay that his son arrives with his girlfriend Cassie an attractive woman who Ralph takes an instant dislike to. Ignoring his relentless provocation she is unfailingly  polite to him and its perhaps more out of frustration that Ralph never gets a moment alone with his son to break the news to him.

Ralph’s desire to unburden what he has kept secret for so long that propels the film with other secrets being revealed along the way and drives him to even consider just doing away with himself which sees a Doctor played by an ever reliable Charles Dance pay him a visit in order to facilitate his wish. As a man dying of an incurable disease it prompts the question as to whether Hurt chose the role deliberately, aware that he had little time left himself.  As a selfish, obstinate old bugger Hurt embraces the role and it’s a film entirely built around his performance but it’s the story which, based on a stage play by N J Crisp, remains stubbornly stagey with the drama almost solely confined to the villa he lives in and the pace at times is as slow as Trump admitting his night of adultery with a porn star.

This is one of those ‘performance’ films and he is ably supported by Sofia Helin as his wife frustrated with her stubborn husband, Max Brown as his estranged son and Erin Richards as the placid girlfriend refusing to be provoked by Ralph’s truculence. With so many memorable roles over the years That Good Night is a fitting swansong for John Hurt.