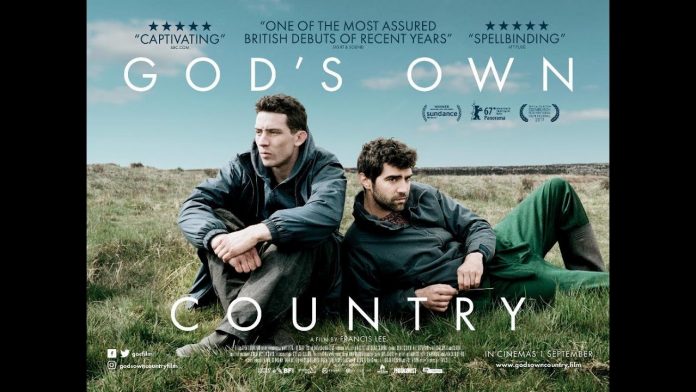 Drunk, vomiting, spitting, peeing against a wall, an illicit sexual liaison in the back of a livestock truck and episode with a hand up a cow’s backside…….it all sounds a bit too similar to the Editors stag night (‘You’re fired!’ – Ed). Instead this is an unflinching start to the portrayal of rural life of young farmer  Johnny Saxby (Josh O’ Connor). Gruff and lonely he is the sole worker on the his father’s farm who has suffered a stroke whilst his grandmother cooks and irons (in just about every scene). But Johnny leads a double life as his father and grandmother are unaware that he is gay taking his opportunities wherever he can whether it be in the back of a truck for livestock or in the local pub toilet, Trapped in an existence where he feels unable to really be himself it’s a female friend, living the freedom of a student life, who knowingly hints at what he’s hiding telling him, ‘it’s a right pain in the arse and not in a good way!’

With the farm work piling up his father hires a Romanian farm hand, Gheorghe (Alec Secareanu) to help out. Johnny can’t hide his animosity towards Alec verbally abusing him but this is a thin veil for his love for the Romanian and they soon embark on a relationship that they hide until Johnny spoils it and Alec leaves. It’s a standard love story trope as to whether Johnny will  go after him to rekindle the relationship.

This is well played by all in some scenes which won’t be for everyone with some graphic sex scenes and it’s a credit to both actors as some scenes would clearly be difficult to play notably when the pair of them play a scene lying on a bed naked from the waist down. The cast are uniformly good with Ian Hart as the stroke afflicted father especially fine.

Perhaps the main fault is that for such a stereotypically macho job in such a community the issue of homophobia never raises its head but the film doesn’t refrain from showing the reality of farm life with hands up cows backsides, still born calves being put down as well as new born animals being nursed to health. Old MacDonald this is not. It would be easy to draw parallels with ‘Brokeback Mountain’ but this is very much its own thing and is an assured debut by writer director Francis Lee who himself was born and raised on his family’s farm.