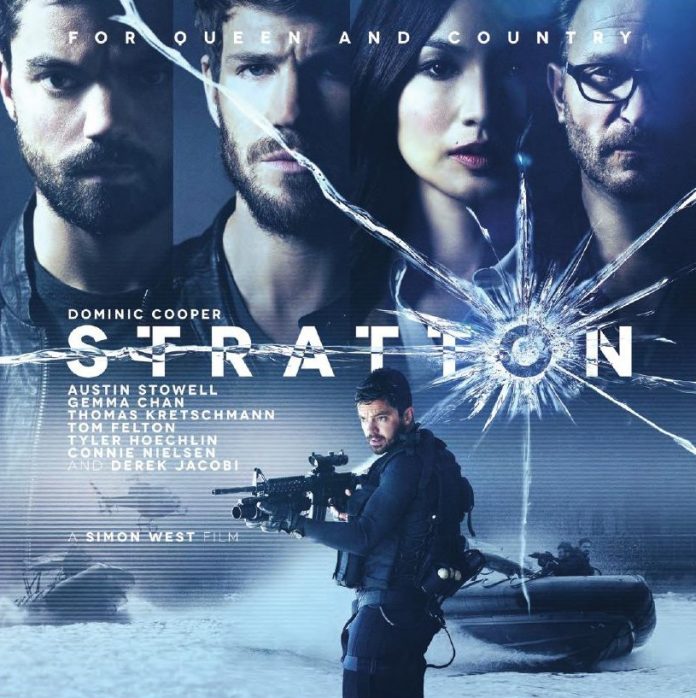 For years the Editor has been trying to persuade us  of his ex military credentials and covert black ops but we’ve come to the conclusion that after all the pints he’s put away only for them to come back up several hours later that he’s probably been referring to black hops……but we digress. After the siege of the Iranian embassy in the early 80’s it bought the SAS and in turn the SBS to the attention of the world as to how superb a fighting force they are and various ex members of the elite squads gave rise to various novels of which ‘Stratton is one based on the series of books by ex SBS soldier Duncan Falconer who has also co- written the screenplay.

Stratton (Dominic Cooper) is an SBS sergeant in a black ops team who we first meet in a covert op to rescue a bunch of prisoners in an industrial complex.  As befits an elite squad who operate on water the opening sequence includes a moment where they swim through a pipe filled with water only to find their path blocked and oxygen quickly running out. It’s a credit to director Simon West that despite the low budget this is an incredibly claustrophobic scene and leaves you gasping for air. Their op does not go well quickly going pear shaped with Stratton, as seems to be compulsory in these type of films, flagrantly disregarding orders which brings him into conflict with the MI6 boss, the rather fetching Connie Nielson, a bit of posh totty who lambasts him, though her character arc soon contradicts itself when she refers to him as the ‘best and brightest’, and she bizarrely settles into the sultry MILF persona and despite his cocking a snook at orders she puts him on the case to locate a terrorist from the old soviet bloc intent on spreading a chemical agent comically called, ‘Satan’s Snow’ which sounds more like a ropey Christmas drink. We’d have preferred it to be called Beelzebub’s Bad Breath but you can’t have everything. The lethal chemical agent is chillingly demonstrated by his henchmen as they drive a truck around a Ukranian village spraying the agent as it goes whilst chased by laughing children.

With an eye on the Bourne/Bond market it has Stratton hopping round the world  with a variety of set pieces  including a boat chase in London’s docklands which owes much to the opening of ‘The World is not Enough’.

Unfortunately as much as an international pedigree as this would have you believe this is firmly rooted in low budget territory though thankfully in the hands of director Simon West he partially manages to hide this for most of the time. West’s back catalogue has some great entries  none more so than ‘Con Air’ so he knows his stuff when it comes to action and can assemble a good sequence but Con Air was a big budget blockbuster which this is not and whereas that had a great scene with a bus crashing into a Vegas casino this resorts to a double decker London bus.

With this elite force being focussed on the importance of team work Stratton is bit of a lone wolf and seems a bit miffed when partnered with a new yet equally qualified partner. Much like Anthony Hopkins in Transformers 5 this has roped in another respected theatrical thespian in Derek Jacobi to lend it some gravitas though frankly his scenes lend little if anything to the plot with only a knowing joke about him only being called Sir when he has been knighted. Oh yes, Very clever. With a series of books to draw on this is a franchise in the making but its limited budget is, on some occasions, painfully obvious, especially in the sequence with the bus and an action film is always going to struggle to conceal limited finances