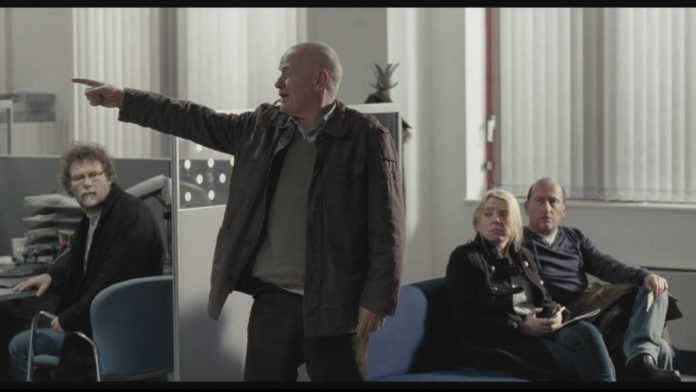 Director Ken Loach, scourge of the Daily Mail and loved by the Left is now 80 years old and is still making utterly impassioned films that rage against the system yet are still funny, warm and with heart and his latest is one of his best. So good that it won him his second Palme D’or award for best film at this year’s Cannes film festival.

Set in modern day Newcastle it follows Daniel Blake (Dave Johns) a carpenter the ‘wrong side’ of fifty who having suffered a massive heart attack is laid off from work under the orders of doctors whilst he recuperates and attempts to claim sickness benefit from the state.  The opening of the film sets the scene for what is to come as a faceless government health assessor in a monotone voice trots out bizarre questions about Blake’s health as he grows increasingly frustrated that few of the questions have little to do with his heart condition. It’s here that the almost Kafkaesque nightmare begins as his claim is knocked back and he tries to work his way through the hideously complex and deeply unfair system to claim what he is rightfully due. His regular visits to the claims office brings him in contact with a single mother, Katie, and her two children who have recently been moved from London to Newcastle by a housing authority and find themselves in the same situation as him. Both struggle to survive on what little money the state gives them and they form an unlikely friendship in their battle against officious state employees.

As ever with a Ken Loach film despite his left wing affiliations you can’t really argue with the bleak scenario he presents here as researched and taken from real life cases uncovered by script writer Paul Laverty. Yet despite the often harrowing moments this is very funny in places and the North East accent lends itself superbly to the comedy yet is just as heart wrenching in the sombre moments. Its damning indictment on a system seemingly obsessed with bureaucracy enforced by staff who can see the unfairness of what they have to do or more often than not run by seemingly inhuman clerks determined to grind people into penury. It’s here that both leads are exceptional with Dave John appalled at how he and everyone else is treated and Hayley Squires, who is something of a Mila Kunis look-a-like as Katie the mother who goes without food to feed her children. It’s her performance that sees her plumb ever more grim depths as she struggles to provide for her 2 children losing herself self respect and dignity in the process epitomised in several devastating scenes with perhaps the most moving and shocking being one at a food bank.

It’s said that people are only three pay cheques away from finding themselves in the situation that is shown here and for that alone it is alarming in a ‘there but for the grace of God’ kind of way and Blake is our eyes into a deeply unfair and often ludicrous system which sees him having to apply for jobs which he can’t take anyway due to his heart attack in order to get his basic living allowance and audiences may also find themselves repeating the line that Blake screams when he sees Katie being humiliated at the claims office, ‘Can we get some perspective?’

In turn funny and frustrating the film makes you angry at the injustice of a system that punishes those that need help the most and Loach and Laverty present likeable people in a seemingly endless and enraging nightmare. Loach can’t quite resist a bit of an anti state polemic towards the end but this is an immensely moving film which even if it doesn’t make you cry it’ll bring a lump to your throat. Forget your blockbusters this is one of the best films you’ll see this year.

( You can see Ken Loach, Paul Laverty, Dave John & Hayley Squires tlak about he film on out YouTube channel)here : https://www.youtube.com/watch?v=VAffJh4YOYA